The movie Giant and Hotel Paisano

Larry and I traveled to Marfa, Texas before going to the writer's retreat last weekend. We'd visited the Hotel Paisano several times to take pictures and walk through the shops and the Giant movie memorabilia room. During the making of Giant, stars and crew stayed in the hotel and today guests can stay in the Rock Hudson and Elizabeth Taylor suites. James Dean's room is one of the basic rooms, but all accommodations have been restored to maintain their historical integrity. Hudson and Taylor soon moved to rented houses in the small town. It's interesting to read accounts of people driving miles to see the movie set and try to glimpse the stars. Google the making of Giant and read some of the stories.
Here are a few pictures of the movie memorabilia. 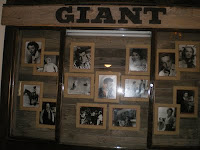 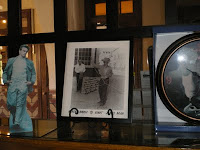 I've always wanted to stay in the hotel and this trip talked Larry into it. We thought about one of the suites but settled on a room on the mezzanine where the rooms have small patios with an outdoor fireplace. Nights are beautiful in west Texas and we envisioned a fire and a glass of the Enchanted Rock red wine we picked up in Fredericksburg. Below are a few pictures of our room. 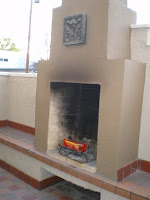 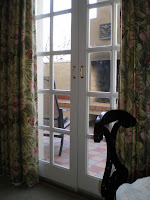 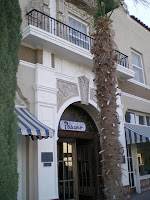 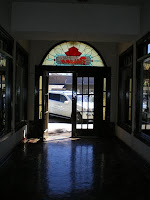 Pictured to each side is the side entrance to the hotel, an interior view of the side hallway and shops. Below is the patio entrance where diners can enjoy their evening meal, have drinks and visit with friends, or merely enjoy the fresh air while reading and pictures of the lobby.
Take a look at the beautiful floor tiles. Though the hotel has air conditioning, it's designed so that breezes rush through keeping the entry area cool. Notice below the indoor pool where the stars swam. Some rooms overlook the pool with small lanais. 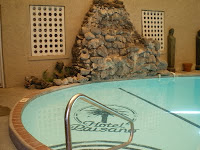 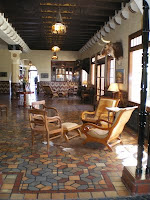 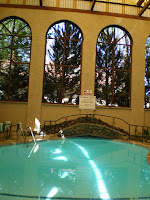 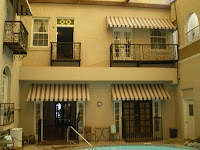 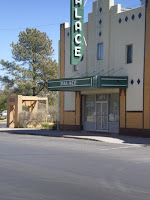 And here is the Palace Theatre where the cast watched movies and screened film clips from the movie. Each evening a plane took off from the small airport to deliver film for processing to a studio in California. It returned the following morning with the processed film ready for viewing. The theatre is no longer open but is the home of an artist.
Can you imagine a book written to take place during this exciting event? Maybe the story of an extra? I can.
I hope you enjoyed my visit to Hotel Paisano. There are a number of vintage pictures on the web just ready for your viewing and stories galore. Please leave a comment to be entered in my monthly ebook drawing.

The Winner of Michael Murphy's autographed book is.... 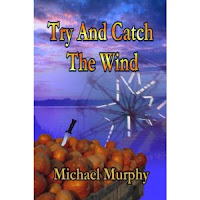 Deborah Margean Anderson. Congratulations, Deborah. Email your snail mail address to linda@lindalaroque.com and I'll get it to Michael.

Thank you all who visited yesterday and especially those who left Michael a comment.


It was great having you here, Michael, to share your newest release Scorpion Bay. Best of luck with sales and with your future works.

Linda
Posted by Linda LaRoque at 5:53 PM No comments:

I'm pleased to have Michael Murphy on my blog today. I've known Michael for several years and enjoy his works. Today he's talking about his newest release, Scorpion Bay. Take a look. It sounds like an awesome read. 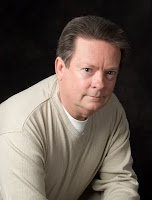 Award winning novelist Michael Murphy and his wife make their home in Arizona with their two cats, four dogs and five chickens. He enjoys writing mystery and suspense novels with twists
and turns and splashes of humor.

Scorpion Bay is his seventh novel. 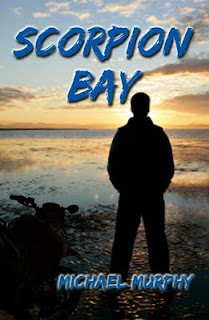 Here's the story behind Scorpion Bay.
When I came up with the story for Scorpion Bay, I knew I wanted to write a mystery/suspense novel involving a Phoenix newscaster. Like my others there would be a mix of humor and offbeat characters along with the danger and suspense. I had everything except a title.
Placing a novel in a real life setting requires accuracy in the details. Since several scenes take place at a marina at Lake Pleasant, I visited the lake so I could accurately convey how the characters would interact with the setting. At the visitors center, I learned all about the lake from a helpful employee. As I was getting ready to leave, he mentioned they were building a new marina at Scorpion Bay.

Had I heard him right? Yup Scorpion Bay. Sounded like a great place for an Arizona lake marina and more importantly, it sounded like the title of a mystery/suspense novel. That's how I came to write Scorpion Bay.


Blurb:
When a car bomb kills the prosecuting attorney and a key witness against a powerful bioengineering industrialist, the blast shatters the life of the attorney’s husband, popular Phoenix television investigative reporter, Parker Knight. After authorities hit a dead end, Parker risks his career and his life to seek his own revenge. Riding a high tech motorcycle and wearing a black disguise, the crusading newsman inadvertently becomes a media created superhero jeopardizing his quest for justice.
You can view the book trailer at http://www.youtube.com/watch?v=rXNPdVVh3ck
Scorpion Bay is available in Kindle.
Paperback is available at Second Wind Publishing.
To learn more about Michael, visit his website.
Connect with Michael on Facebook and Twitter.

Today Michael will be giving away an autographed copy of his first novel Try and Catch the Wind to one lucky commenter. So, leave Michael a comment. You'll also be entered into my monthly ebook drawing.

Thank you for joining us today, Michael and best of luck with sales. I'll be buying a copy of soon.

Spring is Bustin' Out All Over

I'll be blogging on April 16th. My post is titled Texas Blooms in the Spring. I hope you'll join me.