A Short Story—A Haunted House in the Suburbs—Happy Halloween! 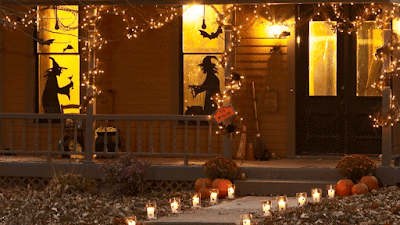 A Haunted House in the Suburbs

I hope your fall is filled with happy times with family and friends—football games, hot apple  cider, nippy walks in the evening, and a good book before a comforting fire.


Happy Reading and Writing!
Linda
Posted by Linda LaRoque at 10:59 AM No comments:

Investment of the Heart—a blurb and excerpt.

This novel, Investment o the Heart, was first published back in 2008. It's just now been re-released with a few minor changes and a new cover. Thank you Diana Carlile of Designs by Diana. 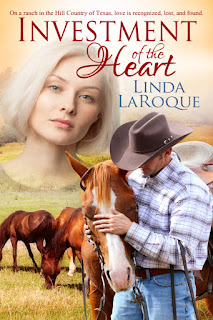 Widow Hallie Barron wants her daughter happily married to the young rancher she loves. When Simon Cole enters Hallie's life she's reminded she's a woman with needs and desires. She yearns for a love like the one she had, but fears risking her heart.

Rancher Simon Cole doesn't feel that city women belong on a ranch. He's set to prove his nephew's fiancée is a mistake. Yet when he meets her mother, he finds himself wishing there was a place for Hallie in his life.

On a ranch in the Hill Country of Texas, love is recognized, lost, and found.

Draining his first beer, he scanned the gaudy room, taking in the familiar dark red, flocked wallpaper, white tablecloths, and heavy gold drapes pulled back with black tassels. The red velvet swing suspended from the stage was empty. He grinned. Damned if the place wasn’t decked out like an old west bordello, an expensive one. The décor notwithstanding, they served superb steaks.
He ordered another beer and glanced around the room. His gaze stopped at the attractive blonde sitting two tables away. Dressed in a wrinkled type skirt and a silky close-fitting knit top, she sat with her chin propped on her right hand. With her left, she drummed trimmed bare fingernails on the white linen tablecloth that ended almost at her lap. She sipped her iced tea as she surveyed the room, her attention returning to the maître d’ near the entrance as if expecting him to walk someone to her table.
Yeah, yeah, I know how you feel, honey. It’s hell waiting on someone when you’ve better things to do.
Hell. He had business in town this afternoon. If the woman didn’t hurry up, he’d end up stuck in the city instead of returning to the ranch near Granite Springs. Not a pleasant prospect since he hated the beds in motels. He could call his cousin, Jo Beth. She’d be glad to see him, but her matchmaking was an aggravation he didn’t want to deal with tonight.
A flash of color jerked his attention back to the nearby table. The woman swiveled, swinging her arm over the back of the chair, pulling her silky top tight across lush curves. He caught his breath and almost choked on a mouthful of beer. Jaw length blond hair teased her cheek. Straight white teeth worried her rosy bottom lip. Oh, man. What a fine looking woman. Scanning the area behind her, she appeared to check the people at each table before moving on to the next. When she turned back around, her gaze locked on his.
The pretty blonde blinked as he studied her. Heat flushed her face. She didn’t back down, and inspected him in return. His eyes crinkled with mischief, and his shoulders shook as he gave in to silent laughter. He held his beer bottle with both hand, thumbs stroking the neck as if it were a woman’s neck. Her eyes widened, and her jaw dropped as she observed his movements. When her gaze returned to his face, he grinned and winked. She gasped at his arrogance then she bit her lip to keep from laughing.
Posted by Linda LaRoque at 7:27 PM No comments: