Attending a High School Reunion as a Teacher

I’ve attended many of my high school reunions and loved seeing all my classmates and the teachers who were able to attend. Next summer we will have our 45th. It hardly seems possible. I don’t feel that old.
Last month, I received a note on my website email address asking if I was the Linda LaRoque who taught Homemaking at Everman High School in the early 1980s. I quickly replied that I was indeed that person. A few weeks later, I received an invitation in the mail to attend the early 1980s class reunion.
Oh, the memories I have of teaching there. A few bad ones, but most were good. I was a Senior Sponsor so accompanied the students on their Senior Trip to a dude ranch. They tubed on the river, swam in the pool, and participated in a variety of other activities. One of their favorites was to toss the teachers in the pool. It was all in good fun. One year the pool was out of commission and we sat in a swing, were hoisted up into the air, it seemed like three stories high, and then the rope was released to send us flying down where we bounced against rubber tires to stop. It was fun but I didn’t want to try it twice.
The late 70’s was the time of the afro hairdo. I never could get my beautician to understand I wanted a spiral perm. I always came out with over curly hair. One year during Everman High School’s Black Heritage celebration, I, along with the biology teacher were elected Black History Faculty Queen and King. The kids had a great time with the joke and gave us a rake as a prize.
That same biology teacher was a real character. One year during in-service, he stuck a suction ended arrow to his forehead and walked around. Of course, he got plenty of laughs. He got even more the next day when he showed up with a big hickey on his forehead. At the end of the year, the faculty had a luncheon and awards were handed out. For that stunt, he was awarded the “Green Weenie Award.”
It was fun to see some of my former students and hard to believe they are in their mid-forties now. Most of the former faculty members who attended are like me, retired now and loving ever minute. Though, I do admit I miss being in the classroom from time to time. I guess what I miss most is the interaction with the kids.
Here are a few pictures. 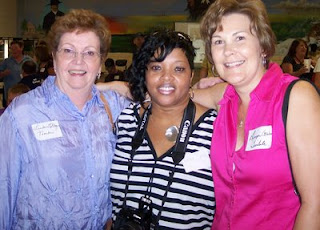 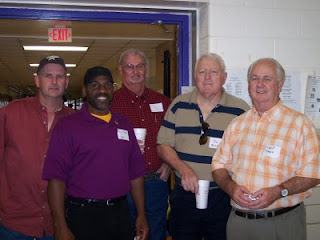 Thanks for stopping by. Please leave a comment if you have time.
Thanks,
Linda