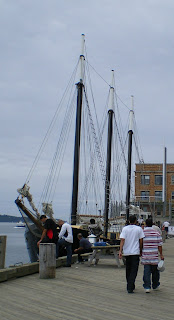 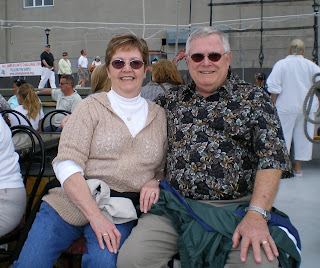 Wednesday we docked in Halifax. My husband thought our tall ship sail was at 11:30, nope it was at 10:00, so we had to rush to get there on time. It was such fun. Of course, even though they put the sails up it was motor operated. We went out into the harbor and were regaled with the history of the pirates of McNab Island and it's importance to the defense of Halifax during times of war.
McNab Island was owned and occupied by a member of the McNab family from 1789 to 1933. In the picture below the island is on the left and to the right (if you look closely) is the lighthouse at Maugher Beach. The beach was called "Hangman's Beach." It was used by the Royal Navy during the Napoleonic Wars to hang mutineers. In 1851 it was the first lighthouse operated on experimental fuel (kerosene). Prior to that whale oil was used. 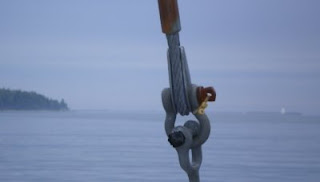 As we returned to the dock, our guide told us about the sinking of the Titanic and of the boats that searched for bodies, how they ran out of embalming fluid and many souls had to be buried at sea. The entire community turned out to see the recovered bodies laid to rest at a cemetery in Halifax. On display at the Titanic Exhibit at the Maritime Museum of the Atlantic is a pair of toddler's shoes that belonged to the unknown child. Ninety-five-years later, in 2007, DNA was used to identify the child as Sidney Lesley Goodwin, the only member of a family of eight whose body was recovered.

I've heard there is a traveling Titanic Exhibition that is excellent. If it visits close to you it would be worth checking into. I sure plan to.
In 1917 Halifax had it's own tragedy--an explosion in the harbor. The Mont Blanc sailed into the harbor without it's red flags raised to indicate it carried explosives. The Imo, carrying citizens to Belgium, was on a crash course. Signals got mixed and they collided. Upon collision, the ships burst into flames, but nineteen minutes later the Mont Blanc exploded hurling it's anchor 3 Kilometers away. The explosion generated a tidal wave, gouged a boulder out of the water onto another ship sinking it. The Halifax explosion was studied when creating the Atomic Bomb.
The picture below is of the CSS Acadia, the only surviving ship to serve in both world wars. She was decommissioned in 1969 and is now on display at Maritime Museum of the Atlantic. 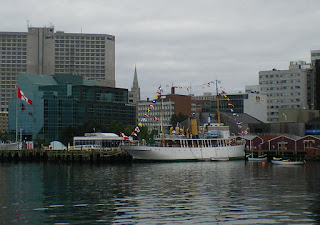 There is so much more to see and experience in Halifax. I'd love to have been able to stay several days more, in particular to see the Citadel National Historical Site. I hope you've enjoyed the pictures and narrative. Our guide on the tall ship was a great resource.


Thanks for stopping by. Please leave a comment. Happy Reading and Writing!