Please welcome Tiffany Green, The Wild Rose Press author, as she celebrates the debut of her fist novel Innocence Lost.

From the first moment I saved the knight in shining armor at age eight, I fell in love with romance. Since then, I have conjured many stories, and now I am excited to bring the best of them to you.

My main love is the Regency historical, but don’t be surprised if you find some medieval and western romances show up.

I am a native Texan and have deep roots in the small Texas town in which I live. My husband is incredibly wonderful and supportive and I have one awesome teenage son. Going back to school for my MBA is keeping me busy, but has not stopped me from my first love—creating exciting new worlds and interesting characters to fill them.


A TIP ABOUT WRITING…

The tip I have about writing deals with Goal, Motivation, and Conflict (GMC). In writing romance, this concept is as necessary as the love story itself. For without these three simple things, there is no story. The goal is the “what” that the main two characters of the story want. Often, the goal of the hero is not at all the goal of the heroine. That is perfectly okay and can even add to the conflict between the two. Motivation is what drives the two characters to achieve their goals. This is the “why” they want their goals. The conflict is the “how” that keeps the characters from realizing their goals. All three work together and must be present in every romance. Without GMC, the story would fall flat and the reader would be bored to death. GMC helps to keep the reader firmly in the story from start to finish. 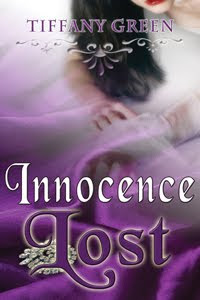 From her first glimpse of his portrait, Lady Megan is smitten. Unfortunately, the handsome face belongs to her brother’s enemy—the Duke of Claremont, Nicholas Bradshaw. Nicholas learns a little too late that the beautiful girl he met at the stream is not at all who he thinks. And now, he must keep her safe from the enemy lurking close to home. When the kidnapper does strike, it takes the assistance of Nicholas, his former foe, and a pirate captain to save Megan. But will it be enough?

A GLIMPSE INTO INNOCENCE LOST…

Megan frowned at the closed door. She set aside her volume of Catullus’s poetry and rose from the chair in her sitting room. Calmly, she opened the door. If it was another man threatening suicide because she hadn’t agreed to marry him…

Julian’s furious voice rang through the house. She gasped and ran down the stairs.

Wentworth bowed and opened the drawing room door, as if he’d been expecting her.

Her heart took a crazy leap at the sight of him standing there. Nicholas. She glanced at her brother and grew worried. The two stood face to face with their fists balled and ready to strike.

As Julian moved forward, she flew between them. Her blood pounded hard in her ears. She stood so close to Nicholas, she could feel the heat of his body. She yearned to step into his arms. Had he come to see her? “What are you doing?” she demanded, looking from one wrathful face to the other.

“Not until I have some answers concerning this.” Nicholas threw a crumpled newspaper down. “Damn you, Julian, you had no right.” Then his gaze shifted to her. Her heart surged up in her throat. He looked flushed with anguish. “How could you do this, Meg? Why didn’t you choose me?” His voice grew hoarse, full of pain. Then he went still. “Or did you choose me and your brother did not honor our agreement?” He jerked his head up and nailed Julian with a glare.

Confusion boiled within her. “What agreement?”

A muscle ticked in Nicholas’s cheek as he kept his eyes on her brother. “Tell her,” he demanded.

She turned to her brother and caught the unease in his eyes. “Julian?”

He heaved a sigh. “Moppet—”

“Don’t you dare call me that, Julian!” She poked a finger into his chest. “Tell me everything. Now!”

With a sigh, he nodded at Nicholas. “He was not to see or speak to you until you selected a husband. And I would not oppose your decision.”

She kept her eyes locked on her brother. “Even if I had named Nicholas?”

She wanted to kill Julian.

“Your brother also insisted that you were to know nothing of this agreement,” Nicholas added.

A sick knot of despair rose up from the depths of her stomach. She started to tremble. Her hands fell limply to her sides. “Are you telling me,” She turned to Nicholas, “that the only reason you’ve been ignoring me is because of a pact you made with Julian?”

His brows were drawn and his eyes filled with pain. He lifted his hand to touch her but halted and lowered his arm.

Her eyes prickled as she turned to her brother. “I cannot believe you did this.”

“No, Julian. You did it for you.” Oh, God, she had been so wrong about everything. Nicholas. Her brother. Everything. She trembled in earnest now.

Nicholas moved closer. He reached out as if to steady her, but didn’t touch her. “Are you all right, Megan?”

She glanced up, her vision swimming. “You were trying to find a way for us to marry?”

A tear skidded down her cheek. “I-I can’t. I’m betrothed to another.”

Thank you for being here today, Tiffany. I've ordered my copy of Innocene Lost and look forward to reading it. You can order your copy at The Wild Rose Press or Amazon. Good luck with sales, Tiffany!

Readers, please leave a comment and you're automatically entered into my monthly ebook drawing.  Victoria Roder, if you're reading you won last month and I need you to contact me. Tiffany has a great contest posted on her website so be sure to check it out.