Our dog Molly and a Copperhead 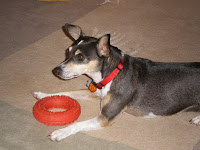 Our little dog Molly thinks she's Queen of the block. Anything or anyone who ventures close to our fence line, the hackles rise on her back and the intruder is blasted with her ferocious bark. I doubt she'd hurt anyone though, as the man that reads the electric meter comes right in and she lopes along beside him as he comes and goes.

My husband has a wood shop in the back yard. Molly loves to hunt and has been known to go under the shed after a mouse. And has caught one or two. Ugh! On August 5th our son came over and cut down alot of vines that clung to the fence. We usually let them stay on the ground as it's muddy back there and Molly tracks it in the house. We hoped the cuttings would form a carpet over the mud. On the 6th my husband heard Molly yelp and saw her run from behind the shop and lay down on the grass. He didn't think anything of it.

An hour later I called her in. She wasn't her usual chipper self, and her face looked like a chipmonks. I thought she had her mouth full of something. When I realized she was swollen, we loaded her in the car and drove to the Vet. She showed us where the fang marks were on her nose and believed it was a copperhead as a rattler wouldn't have made Molly much sicker. Several dogs have died this summer due to rattler bites. She gave Molly two shots and kept her all afternoon to make sure she didn't get worse. We came home with two bottles of pills.

There is a rattlesnack anti-venom your animal can be given, something we may consider even though we don't live in a brushy area. We live on a corner in a small housing development but there is a big field across the road. I think we will have to clean that brush out and make sure the copperheads don't have a place to hide.

Here are a few pictures of Molly taken at the Vet's Office. 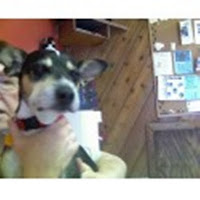 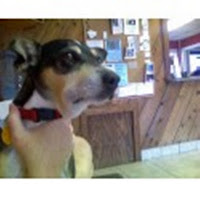 Linda
http://www.lindalaroque.com/
Posted by Linda LaRoque at 11:25 AM