Cover for A Marshal of Her Own 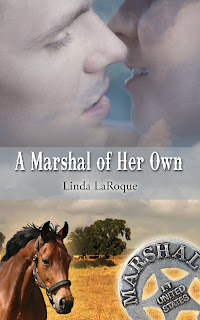 Today I received this beautiful cover for my upcoming The Wild Rose Press release, A Marshal of Her Own. It was designed by the talented Kimberlee Mendoza. Thank you, Kimberlee!

A time travel set in 1890s Prairie, Texas, this story picks up where A Law of Her Own ended.

Here is a blurb.

I'll post the release date as soon as I have it. At present I'm working on a third story set in Prairie, Texas.

I've not forgotten May's Ebook drawing. I hope to let my grandson draw a name this weekend.

Email ThisBlogThis!Share to TwitterShare to FacebookShare to Pinterest
Labels: A Law of Her Own, A Marshal of Her Own, Linda LaRoque, time travel romance, western historical