Time Travel Romances, in the 1990s and Today

It's hard to believe the time travel romance genre has been around for over 20 years-- and I only first read Jude Deveraux's 1989 classic "A Knight in Shining Armor" this summer, which makes me several decades behind most other people. However, I fell in love with it, because it tackles so many issues that most time travel romances are too afraid to take on. Like for example, the quality of life issue the heroine faces in the past-- and what happens when she tragically mucks up the timeline with her meddling? It's an inventive tour de force that IMO hasn't been equalled.

My problem with a lot of time travel romances in the '90s, post "A Knight in Shining Armor," is how sugary and contrived many of them seemed to be. Judith O'Brien was a prolific and popular time travel romance author 15 years ago-- I'm quite fond of her YA time travel novel "Timeless Love" from 2002, but I'm not as crazy about the adult time travel romances she was writing earlier. Many of her earlier novels are inoffensively cute (like "Once Upon a Rose") but some of them are so romanticized that they left a bad taste in my mouth.

For example, "Ashton's Bride," where the heroine goes back to the Civil War era south, was particularly hard to read, especially since the Yankee heroine learns her lesson about why it's wrong to hate the Confederacy, and she ends up staying the 1860s, which is such a depressing prospect to me that I find it difficult to be happy for this character. I'm not comfortable viewing the Confederacy through such rose-colored glasses, and while I was reading "Bride," I kept thinking of Ta-nahesi Coates' provocative and fascinating piece in the Atlantic. Whether you agree with Coates or not, I think it's safe to say that, boyfriend or not, most modern-day women would prefer not to spend the rest of their lives in Reconstruction-era Tennessee. Probably the best time travel story I've ever read that involved the 19th century American south is Octavia Butler's "Kindred." It's not a romance in the genre sense-- but it is a love story, one which takes an uncompromising look at history, slavery, and race.

Many other time travel romances written in the '90s were pretty much fluff pieces, and while there's nothing wrong with that, sometimes I like to read time travel romances that aren't afraid to take on the darker aspects of history. Because of the proliferation of e-presses, I think the genre has opened up to edgier stories: I'm thinking mainly of Linda LaRoque's A Way Back, where the heroine time travels back to the early years of the Great Depression; she helps save the life of a banker who is financially ruined and on the verge of suicide. Another notable example is Carrie Lofty's Sundial, where the hero, a 1980s boy stranded in 1950s Italy, turns to selling heroin to survive.

Both of these stories, unlike many time travel romances that came out in the '90s, involve time travel to more recent decades in the 20th century.This is probably just a personal preference, due to my abiding love for such shows as "Quantum Leap," "Life on Mars" and "Journeyman," but I vastly prefer using modern history-- as opposed to the heroine going back to some more remote time period, like Charlemagne's France, or Renaissance Scotland. When I read some book where the heroine goes back to, say, the middle ages, I mainly think of how unlikely it is for her to even survive. How can she even communicate? Given the rampant infectious diseases common back then (like the sweating sickness), wouldn't it be likely for her to get sick and die? I know… wondering about disease and immunity isn't terribly romantic, but I think about these things. (One of the few medieval time travels I like is the "Doomsday Book" by Connie Willis. It's a superb story, though it's sci-fi, not romance; but it is believable and well-researched, though the main character, Kivrin, goes through hell. The Black Death ain't fun, that's for sure!)

I prefer 20th century time travel stories because I feel the hero or heroine has a much better chance of not dying. In LaRoque's "A Way Back," I wasn't surprised when Amber prospers in the 1930s, and decides to stay; and as for Lofty's "Sundial," Mark (the displaced 1980s guy) manages to survive, but it's incredibly difficult for him. In both stories, there are mentions of other people who've time traveled, and who haven't been as lucky-- I like how there's these chilling notes of how dangerous time travel is. As appealing as the idea of time travel is, there's something horrific to it, that I don't think should be forgotten. It's not all unicorns and rainbows. Think of such time travel movies like "Back to the Future II," George Pal's "The Time Machine" or most notably, Ray Bradbury's classic short story "The Sound of Thunder"-- time travel can be scary stuff.

One reason "Sundial" made such an impression on me is the romance between the modern-day, new millennium heroine, and 1980s Mark. When I first saw the story on Fictionwise, I was amazed that an author would use such a recent time period-- it reminded me, back in the mid '90s, when there would be discussions about time travel romances on various message boards, how people would react when I said I wanted to read about 1970s time travel. "But that was so recent! I remember it, and it was horrible!" was the usual response. And then I would say: "Yeah, but I could see the Sex Pistols and the Clash live when they were young! Plus I wouldn't have to worry about disease, or finding the right clothes, and I'd be okay if I went out by myself. As time travel goes, it would be relatively low stress. And a story where a girl goes back to the '70s would be fun, because-- not only would there be sex, drugs and rock and roll-- she could meet her relatives when they were young, like in 'Back to the Future.'"

At the time, I felt as if my suggestions fell on deaf ears, but I think a tiny seed of an idea was implanted in my mind. When I saw "Sundial" it reminded me of what I'd been saying about '70s time travel way back in '96: and I always wondered what it would be like to have an 1980s themed time travel romance. It took me a few years to get around to writing it, but I finally did at the end of last year: I called it A Question of Time (after the Depeche Mode song) and I was thrilled when it was accepted by Champagne Books over the summer. It's coming out in November 2012-- and if you're interested, you can see a more complete story of how this story came to be on my blog.

I think it is quite possibly the first 1980s time travel romance ever written-- and it's got New Wave bands, teen boutiques, nouvelle cuisine, ginormous glasses and boxy cars aplenty. But it's not all synthpop, leopard-print polyester, and pink neon; in honor of Carrie Lofty and Linda LaRoque, it takes on a few darker themes too. And sometimes I wonder what my younger self would say, if I could time travel back to 1996 and tell me what would happen. 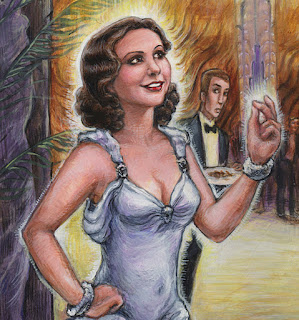 Joanne Renaud, who earned a BFA in illustration from Art Center College of Design, has been writing, drawing and painting as long as she can remember. She went to college in a variety of places, including Northern Ireland and Southern California, and enjoys history, comics, children’s books, and cheesy fantasy movies from the ’80s. She currently works as both an author and a freelance illustrator in the Atlanta area. Her novel "A Question of Time" is due for release from Champagne Books in November 2012, and her illustration clients include Simon & Schuster, Random House, Houghton Mifflin, Macmillan-McGraw Hill, Harcourt Inc., Compass Media, and GOS Multimedia. Thanks for being here today, Joanne. Good luck with your upcoming time travel release A Question of Time. Readers, click on the link above and read the blurb for her upcoming novel. Also, browse Joanne's beautiful website and artwork, connect with her on her blog , Twitter, deviantArt site and view her portfolio site.
Please leave Joanne a comment or a question and thanks for stopping by.
Linda
Posted by Linda LaRoque at 10:11 PM