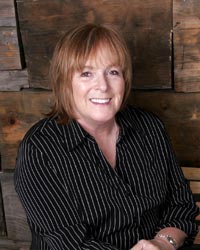 Linda, thank you so much for having me here today.

I never think that much about technology. I’m in my 60s, so I’ve lived more of my life without a computer and a cell phone and a Kindle than I have with them. I sew, I cook, I walk, I’m active. Unlike some people my age, I like learning electronic ins and outs, though I’m not good at them. I love my I-phone with its pretty purple case and my Kindle that weighs a lot less than a suitcase full of books, but I’m not dependent on them.

At least, not exactly. The following is what I wrote yesterday.

Here I sit without benefit of a keyboard or a screen. Even my phone is unavailable. I can’t check email, read blogs, or Google myself. I can’t open a file and write.

Goodness knows, I need to do that! In these days of promoting myself and my new book, ONE MORE SUMMER nonstop and ad nauseum, I’ve written no fiction. I haven’t gotten closer to my protagonists. Haven’t laughed or cried or said, “Let’s wait just a damn minute here” when they’ve led down an unexpected (and sometimes unwanted) garden path.

But, no, here I sit…. It’s beautiful outside, warm and sunny. I hope I will have time to walk later on this most un-Indiana-like January day. The grass is even green below the window I’m seated next to, the sky a strong, bright blue that belongs in mid-March—maybe even April. I would write about this, wax poetic about the spring-like beauty of the day. If I had my computer. Or, for that matter, anybody’s computer.

But I don’t. I’m at school, halfway through the first three-hour session of the only class I’m taking in the second semester. The instructor gave us a break, even though there are no vending machines or coffeepots or break areas on this satellite campus. Therefore I have time to sit here with a dozen or so barely post-adolescents who are busily texting and wish I’d brought my cell phone to class. I’ll write all this out in longhand and type it on my laptop when I get home. And I wouldn’t think much about this, except for one thing.

The course I’m taking is a computer class.

How about you? Have you had a wakeup call that let you realize how electronically-dependent you’ve become. Or did you realize that you’re stronger willed than I am and would be perfectly happy going back to pen, pad, and—oh, Lord—typewriter? 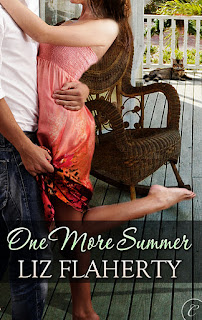 ONE MORE SUMMER is the book of my heart and I hope you like it, too. Thanks for coming by.

I’d love to have you visit my website http://lizflaherty.com or http://wordwranglers.blogspot.com/ where I hang out with some of my best writer friends.

Grace has taken care of her widowed father her entire adult life and the ornery old goat has finally died. She has no job, no skills and very little money, and has heard her father's prediction that no decent man would ever want her so often she accepts it as fact.

But she does have a big old house on Lawyers Row in Peacock, Tennessee. She opens a rooming house and quickly gathers a motley crew of tenants - Promise, Grace's best friend since kindergarten, who's fighting cancer; Maxie, an aging soap opera actress who hasn't lost her flair for the dramatic; Jonah, a sweet gullible old man with a crush on Maxie.

And Dillon, Grace's brother's best friend, who stood her up on the night of her senior prom and has regretted it ever since. Dillon rents Grace's guest house for the summer and hopes to make up for lost time and past hurts - but first, he'll have to convince Grace that she's worth loving...

Grace had taken her lengthy bath in the claw foot tub, shaved her legs and nicked her ankle right on the bone where it hurt most, and put on her chenille robe. She’d poured a tumbler full of the expensive wine Steven had brought a case of and sat on the couch with the book she’d gotten at the library when she’d read to the kids earlier in the week. Louisa May slept on the couch back, twitching her tail occasionally and smacking Grace in the face with it. Rosamunde dozed contentedly in the baseball cap Dillon had left on the lamp table. The window behind the couch was open, affording Grace a cooling breeze scented by the rain that had fallen that evening.

She’d already gotten up once and closed the pocket doors between the living room and the dining room. But she could still hear it.

Laughing. There were Jonah’s guffaw, Maxie’s theatrical trill, and the husky whoop that was always such a surprise coming from Promise’s soprano throat. Now and then another laugh slipped in, quieter than Jonah’s but no less gleeful. Dillon was there too. They sat on the screened porch, a good forty feet from where Grace sat with her feet up, and still she could hear them.

They were playing Monopoly. Grace hadn’t played that since the day before her mother died. She remembered that last game, the board balanced on a bed tray across Debbie Elliot’s legs in the room that smelled of Cashmere Bouquet talcum powder and sickness and medicine. Faith had sat on one side of her mother, Promise on the other, and Grace at the bed’s end.

“Sit on my feet a little, baby,” Debbie had said. “You keep them so nice and warm.”

Grace had won the game, and the next day—when Debbie was dead and life for the rest of the Elliots had irrevocably changed—she had hated herself for buying Boardwalk and Park Place and forcing her mother into bankruptcy.

“Her heart made her die,” he’d responded, but Grace hadn’t really believed him until he became a cardiac surgeon.

Sometimes, she still wondered. If Debbie had napped in the evening as she often did, would that hour of rest have made the difference? If Grace hadn’t sat on her mother’s feet with her eighty-five pounds of almost-twelve-year-old exuberance, would the final heart attack not have happened?

But she refused to think about those things now, nor would she consider the game of Monopoly with an inward shudder of dread. She thought instead of the laughter that was dancing along her nerve endings, and wondered if anyone else was using the little iron as their token for moving around the board. The iron had always been her favorite. She liked the way it felt between her fingers.

If she just got off her couch and wandered toward the porch like she was bored with her own company—which she was—would anyone make a big deal out of it? If Promise or the others acted surprised by her presence, Dillon Campbell would think she’d joined them just because he was there. Which was nonsense.

Of course it was.

She remembered how Dillon’s hand had felt when he pulled her to her feet the night before. She’d avoided unnecessary touch all her adult life, and one squeeze of Dillon Campbell’s fingers had her wondering if that hadn’t been a mistake.

She tried again to devote full attention to the book, but finally gave up and laid it aside. She sat in the harsh light from the reading lamp and sipped her high dollar wine and listened to the laughter of the others. Isolation and loneliness wrapped around her, not new feelings by any means, but somehow deeper and darker tonight.

Maybe this time, as Promise often accused, she was excluding herself and the loneliness was of her own making. Maybe if she stepped onto the back porch, no one would make a fuss and no one would make her feel as though she didn’t belong. It was, after all, her porch.

Carrying her glass, she whispered open the pocket doors and strode barefoot through the deserted dining room and the kitchen with its ever-present light over the sink. After a moment’s hesitation, she pushed open the door to the porch.

“Replacement power. Just in time.” Promise’s smile was wide and brilliant. Welcome to the human race. Grace heard the words she didn’t say. “Now that I’ve been trounced, Grace can take my place while I make popcorn. No one’s using your iron, so have at it.”

Grace sat in the chair Promise vacated, taking the little metal iron from the Monopoly box. It still felt nice between her fingers.

“I’m the banker,” Jonah informed her, passing money around the table. “Since I’m better at losing money than anyone else, I was unanimously elected.”

“I don’t even know why I play.” Maxie sighed, fluffing her blond hair with heavily be-ringed fingers. “I seem to spend all my time in jail. Unless Dillon rescues me with his ‘get out of jail free’ cards,” she added with a flutter of eyelashes.

“I’m just a soft touch for a pretty lady.” Dillon smiled at her, his eyes glinting silver in the dim, yellow light on the porch.

Grace’s heart hammered against her ribs.

Thank you for being here today, Liz, and sharing One More Summer with us. Ah, those books of the heart, they're keepers and yours sounds like one I'd enjoy.

Readers, I hope you'll leave Liz a comment or question.