My Fetish Collection -- Zuni Fetishes That Is!

When I mention I have a fetish collection, I get odd looks. After I explain I collect Zuni fetishes, small animal carvings often believed to have magical powers, they grin and say, "Oh."

Both the Zuni and Navajo make fetishes, but the Zuni are famous for theirs.  In the 1970s the Navajo began copying and passing theirs off as Zuni which has been a problem ever since. "When a carving has been blessed during  a Zuni Medicine ceremony at the winter solstice, it becomes a fetish and is considered sacred."(1) Otherwise they are basically a rock carving but are referred to as fetishes. Also, fetishes need to be fed. Those who carry theirs in a pocket usually sprinkle a little cornmeal in it for food.

Because of their size, they are not signed and when you purchase one it's best to ask for some type of authentication. Usually it's a small card. Today some artisans are signing theirs. If you decide to purchase a few, research and become familiar with the names of the Zuni craftsmen. If you visit the Zuni Reservation, individuals selling carvings independently may approach you. Depending on what you're looking for, you might get a good deal. The reservation is filled with artists.

Very old, early fetishes are crudely made, many are hard to recognize as the animal they represent. They're very valuable, especially to the Zuni community.

My fetishes are collected merely for their beauty and artistic qualities and have no religious connotation for me. I enjoy looking at them in my china cabinet.

My research on the Zuni Indians and Chaco Canyon for Flames on the Sky, the second book in The Turquoise Legacy, spurred my interest in the small animal carvings. They were perfect for adding mystery and mysticism to the story and special attributes to the hero and heroine. Lonan Stone's fetish is the bear, the protector--his job is to protect the hunter who's hair spits fire--Madison. In the journey he and heroine, Madison Evans must travel back in time to fulfill an ancient prophecy. Madison is given a badger fetish to wear around her neck at all times. It represents aggressiveness and perseverance and it will help her use her inner resources when the time comes. 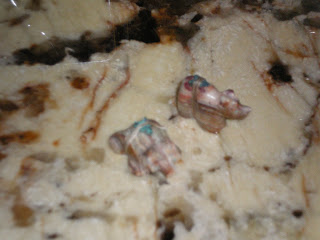 To the left are pictures of my second and third purchases--Lonan's bear and Madison's badger. Both have turquoise strapped to their backs. Some have feathers and other adornment.

Here is a short excerpt from Flames on the Sky. It takes place the first time Madison and Lonan travel back to 1000 AD together and encounter the ancient Anasazi. Lonan walks down the cliff path to meet the warriors but insists Madison stay where she is. 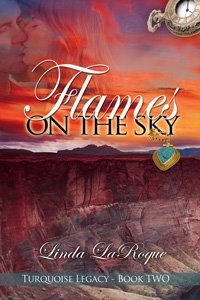 Once in the circle, their fighters moved back to allow the Elders to approach. Madison could see they were talking, but couldn’t hear and it sounded liked gibberish. Suddenly, she heard Lonan shout. There was a struggle and his arms were grabbed from behind and tied.

Panic inched up her spine. She had to do something. He wasn’t supposed to face this task alone. It was hers and he was her protector. Lonan struggled and kicked out with his feet knocking several people down. The badger fetish at the pulse point of her neck grew warm, reminding her the figure represented fierceness.

Someone swung their war club, hitting Lonan on the head. He fell like a tree. Stunned, she stared down in horror. Oh, God. What am I going to do? Please help me.

Lonan’s lookalike strode toward the path that led up the cliff. Rage consumed her, her scream of fury and panic echoed off the canyon walls. She knocked her hat off, removed the clip holding her hair up, and using her fingers scrubbed the mass into a wild bird’s nest. The sun was behind her, so no doubt her head looked on fire.

At her scream, the warrior stopped. Hat hanging against her back, she started down the cliff, picking up speed until like an angry bull she met the man head-on, her momentum knocking him on his butt. She went down with him, but was on her feet, running before he could recover.

Yelling and chanting like the crazy witch woman she’d become, she snarled and snapped at people in her way. No one challenged her, but let her pass, mouths agape. She dropped beside Lonan, pulled the large knife from the scabbard in his boot and cut the bonds on his wrist. His head wound wasn’t bad but bleeding profusely. She had nothing with which to staunch the blood. Afraid to turn her back on her audience for more than a second, she stood and strode around him, swinging the big knife warningly, growling at anyone rash enough to test her. If they did, she knew without a doubt she’d kill to protect Lonan. 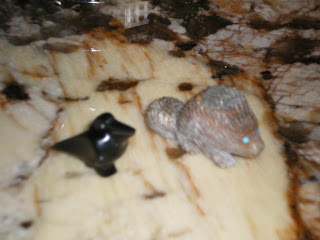 Here are my raven and porcupine. They are significant in my newest release, A Stolen Chance. 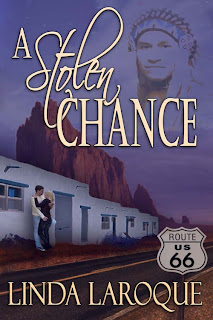 Mystery and danger lead two people on a path of discovery.

Running from an ex husband bent on revenge, Susan Lawton finds refuge at a small motel along old Route 66 in Siesta, New Mexico. Albuquerque police detective Carson Rhodes can’t live with the atrocity he committed, so he resigns his commission and returns home to run the haunted Siesta Motel and Café. As they battle their demons, and locate a lost Zuni treasure, will Susan and Carson win their war against evil and will a lasting love be their reward?

For a chance to win a PDF copy of Flames on the Sky, leave a comment and tell me what the white bear fetish is known for.