Stagecoach Stations in the West

I'd hoped to have the book on Stagecoach Inns long before now, but, alas, my book is not here. The seller fears it may have been lost in the mail. So, I'm going to do my best to tell the story with the information I have garnered from the web and Pecos County History.

In the East, stagecoach inns were much like large residences and hotels. The home to the left, the Harry Kennedy House in Centerville, Alabama, was built in 1837 as a stagecoach stop and hotel. Below is a picture of the Glover Tavern, a stagecoach stop in Forkland, AL. To the right is the tavern now.  It has been restored and is now a family residence. 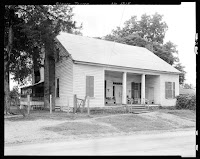 Many offered overnight boarding and delicious meals. With others, the accommodations and food were not ideal, but to a tired traveler they were, in most cases, acceptable.

The picture to the above right is of the Anderson Stage Stop in Monroe County. Note the dog trot style cabin. The open space provided a nice breeze which helped to cool the house. This stop is the only one remaining on the Old Federal Road. The picture to the left is of a livery stable. I'm not positive of it's location, but it is Alabama.

References for above data and photos :  www.al.com/living/indes.ssf./2014/08/few_historic_inns_and_taverns.html

In San Antonio, the stage often stopped at the Menger Hotel, and in Fredericksburg, at the Nimitz Hotel.

The Menger Hotel is still open to guests and individuals have been known to claim they've seen or heard ghosts. Teddy Roosevelt often frequented the Menger and it's saloon. A wall in the hallway is dedicated to Teddy and The Rough Riders.

The Nimitz Hotel is now the General Nimitz Museum, a fascinating place to visit and explore artifacts from World War II.

As stagecoach routes opened up farther west, accommodations provided were to meet basic needs and not necessarily to provide comfort.

It's important to mention, that in the West horses were rarely used to lead coaches. The best animal to use was the mule. Also, in areas where the roads were particularly rough or mountainous, or for short hauls, Celebrity wagons, also called mud wagons and mail wagons, were used. They were lighter weight than the Concord and cost about 1/2 as much to build. They carried from four to twelve passengers depending on how they were made, and had open sides. Leather or cloth flaps could be rolled down to offer some protection from the elements.

A mule occurs when a female horse is bred with a donkey. The result was an animal that is "strong and sure footed. They lacked the free spirit nature of horses and were, indeed, creatures of habit. A good caporal, the name given to the person in any wagon train in charge of the animals, had only to crack his whip in the morning for the mules to line up not only in front of its assigned wagon but even its assigned place within the team, which could consist of between six and eight animals."


The story I'm writing takes place in Fort Stockton, far West Texas. Stage stops might be from 30-50 miles apart, and schedules had to be kept. So, a break might last 10-15 minutes, just enough time to hitch fresh mules. The stage stands were completed by 1850 as way stations along mail routes. They were all similar, built on the same plan, made of adobe and usually stood on a rise or broad sweep of ground without much foliage. This allowed the stage tender to be able to see for miles around in every direction.

Made of adobe, they had a broad entrance with a gate and a roof overhead. It appeared much like the dog trot on log homes though the opening was wider and the roof was pitched, not flat. A room was located on each side of the entrance—one for cooking and and eating, and the other was used for sleeping and served as a storeroom. The stage company supplied the supplies and any money made off meals and supplies sold were kept by the stage tender. To the rear of these rooms, was a corral or patio where the mules were kept. The walls of the corral, made of adobe brick, were 12 to 15 feet high and two or three feet thick. When a stage entered, the mules were quickly unhitched and the stage was turned around, by hand, and pointed toward the entrance before the fresh team was hitched.

"When the fresh mules were hitched to the stagecoach and the gates again opened, with a yell from the driver, and a crack from his whip, the mules would dash out of the enclosure on a wild run, which did not slacken until the next stage stand was reached." 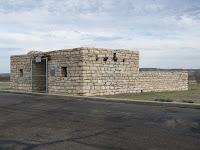 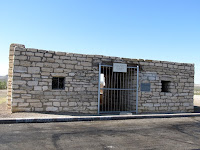 Stagecoaches traveling through Pecos County, stopped at places where water was available. One of those places was Escondido (Tunas Springs), 20 miles east of  Comanche Springs where Fort Stockton is located today. A replica of the stage stand is on Highway 290, east of Fort Stockton near Escondido.

Credit for these photos goes to LenRoy Graham.

Thanks for stopping by today. Happy Reading and Writing!

Posted by Linda LaRoque at 5:51 PM