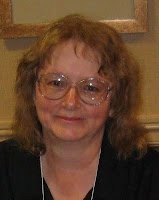 An Indiana native, Sandy's been in Ohio since 1973. Her husband of 36 years, two sons, a daughter-in-law, two granddaughters, two dogs, and some goldfish in an pond all live with her in an 1890s Victorian home. She began writing in third grade by turning her nightmares into stories. She read science fiction and super-hero comic books back then. The adult writing bug bit her in 1990. After realizing she needed the degree most writers seem to have, Ohio State University beckoned. She earned a bachelor’s in English, and sold an essay to Country, wrote for three newspapers and was a feature writer for Choice, a Christian magazine. While writing science fiction, inspirational romance, and women’s fiction, she substitutes in local schools, teaches college English in local prisons, gardens, and does artwork in several media. She’s a proud Veteran of the USAF. In addition to Mid-Ohio Writers Association, RWA, and Central Ohio Fiction Writers, she’s a member of RomVets, an on-line group of Veterans who write romance.


Below is an excerpt of the article Sandy wrote for her local newspaper about the Midwestern Dreams Conference.

Brenda Nixon, Nationally-known parent empowerment author and speaker and award-winning crime fiction author, Craig McDonald, will be the keynote speakers at the second annual Midwestern Dreams conference on October 24th, sponsored by the Mid-Ohio Writers Association. Also, in a first for north-central Ohio, Nan Swanson and Mary Albright, editors from a major publisher of romance fiction will also be speaking and taking 8-minute appointments from romance authors who have a manuscript they’d like to pitch for possible publication by The Wild Rose Press or White Rose Publishing.


Brenda will speak on “Getting Published is Doable if you Pay Your Dos.” She speaks at seminars for parents and has appeared on many syndicated radio programs, and her feature articles have appeared in more than 100 publications and she works with the Regional Parenting Publication (RPP) market. She’s written The Birth to Five Book, A Scrapbook of Christmas Firsts, You Can Speak, and Parenting Power in the Early Years. She’s contributed to 24 other books.

Edgar-nominee Craig McDonald is an award-winning journalist, editor, and fiction writer. He’ll speak on “The Path to Publication in the Mystery World.” His short fiction has appeared in literary magazines, anthologies, and several online crime fiction sites. He was a contributor to the New York Times nonfiction bestseller, Secrets of the Code. His nonfiction books include Art in the Blood, a collection of interviews with 20 major crime authors, and Rogue Males: Conversations and Confrontations About the Writing Life, a collection of interviews to be published by Bleak House Books.

The conference’s seven workshops will be presented by Ohio authors in a variety of genres: “Today's Mysteries Aren't Your Grandmother's Cozies Anymore!”-Craig McDonald; “Writing Successful Poems,”-Poet Connie Willett Everett; “Paralanguage to Heighten Emotions and Sell Your Manuscript!”-jj Keller; “What Betty Said to Veronica-Writing for Young Adults,” Denise Gwen; “Meet the Press on Common Ground: Media Tips, Tricks, & Traps for Authors,”-Keena Kincaid; “Networking Your Way to A Contract,” Kathleen McIver; and “What Does That Mean?” Brenda Nixon.

The cost for the conference is $15 and a continental breakfast and pizza and dessert lunch will be provided. The conference location is the People’s Community Center, 597 Park Avenue East, Mansfield, Ohio, 44905. See http://www.midohiowriters.org/ or http://www.sandywick.com/ (click on Midwestern Dreams page) for complete information. Registration cutoff date is now October 18th.

On October 23rd, Mid-Ohio Writers Association is sponsoring a multi-author booksigning at Holly’s Book Rack, also a first-of-its-kind event for this area. Ten other Ohio authors will be joining MOWA’s published authors from 2:00pm to 5:00pm at 1464 Lexington Avenue next to the Kroger in the Appleseed Shopping Center.

Cottonwood Place-Megan MacCloud knows before meeting him that Ian Hunter is the neediest of the many troubled guests her inn has helped. Estranged from God, neither she nor Ian believe that He can bring them the harmony and love they crave. Ian says he couldn't resist driving across the country to her after her face on a brochure "hypnotized" him. Because of past abuse, her attraction to him is dashed when she learns he drinks. She resists loving Ian, but her family and almost-human pets frustratingly bond with him immediately, proving he's good. Megan, her Grandma, and pets resolve to help Ian stop drinking and be a doctor again. He helps solve major problems with guests and saves several lives as Megan and her mysterious, Navajo-and-White family show him religious and lifestyle philosophies that are foreign to him, yet truly American. When Megan's kidnapped by a guest for unknown reasons, Grandma says that to find Megan and have the life with her that he dreamed of, Ian must first "find himself." What does that mean? Can God use Megan's family, their Navajo ceremonies, and the police to find Megan and help her and Ian "walk in beauty" before she's lost forever?

The Winds of Fall-Unknown to Skye Worthington, the people most important to her are keeping unearthly secrets from her. If not revealed and faced, these secrets will cause death for untold billions of people, Skye included. Rebelling against his family and their deadly, but necessary, secrets which kept him a recluse in a Caribbean paradise, Joe Allen meets Skye. They fall into a love forbidden to Joe. Can two people with unimaginable secrets—and more in common than either know—overcome a force capable of entering dreams and taking humans through outer space without life support to other planets? This is the dilemma facing Skye and Joe as she fights to keep her sanity, and her identity as a human being.


Hi Linda, thank you for allowing me to come on your blog to publicize myself and the Mid-Ohio Writers Association’s annual conference. I think anyone who comes will leave energized about writing and will have learned a ton. They’ll be getting for $15 what most writing-conference goers are charged $100 or more.

You're welcome, Sandy. It's been a pleasure to meet you and learn more about your books.

Readers, please leave a comment for Sandy. Remember, each comment adds your name to my monthly ebook drawing.

Thanks and Happy Reading and Writing!

Linda
Posted by Linda LaRoque at 11:46 AM