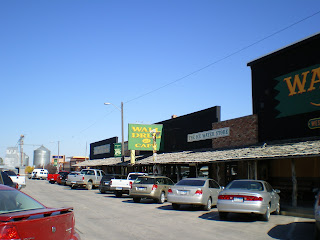 In 1931, a young pharmacist, Ted Hustead, and his wife, Dorothy, purchased a drug store in Wall, South Dakota. They gave themselves five years to build their business into a success. By 1936, the pharmacy wasn't the success Ted desired. Though he filled a few prescriptions, he spent much of his time swatting flies and looking out the door at the shade-less street.

One hot day in July Dorothy tried to nap with her two children but the loud jalopies on Route 16A kept her awake. An idea on how to bring people into the store popped into her head. All those people driving across the prairie were thirsty. They'd put up signs along the road advertising free ice water. On the day Ted put the signs out, people were already arriving before he returned to the store.

While getting their free ice water, some customers bought ice cream cones, sodas, and other items. From that day on, Wall Drug had plenty of customers each day. The following summer it was necessary to hire eight girls to help out. Now the drug store draws up to 20,000 customers on a good summer day.

My husband and I ate lunch in the cafe attached to the drug store. Larry had their buffalo burger which he said was delicious. I wasn't brave enough and opted for a regular hamburger. After lunch we browsed the many gift shops. That evening we came back for pie with homemade ice cream and a cup of their 5 cent coffee.

Thanks to JL Wilson for telling me about Wall Drug. Otherwise, we'd have missed it. If you're ever in the area, it's worth your time to stop.

My next post will be will be about Mount Rushmore and the Crazy Horse Memorial.