Please welcome paranormal author Shiela Steward as she talks about her new release and shares the recipe for one of her family's favorite sweet treats.

Raised on a rural farm in Saskatchewan, Canada, Shiela Stewart relied on her vivid imagination to fill her days. Never did she realize that her need to tell a story would someday lead to becoming a published author.

In the fall of two thousand and six, Shiela published her very first book and she hasn’t stopped since.
When not writing, Shiela spends time with the love of her life and biggest supporter, William. She enjoys doting on her children and granddaughter. She has a strong affection for animals which is evident in the five cats, one dog, plenty of fish and one turtle she owns.

Some of her other passions are home décor, crocheting and knitting. 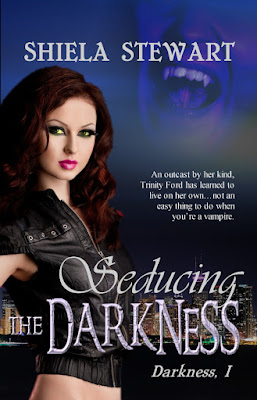 An outcast by her kind, Trinity Ford has learned to live on her own..not an easy thing to do when you’re a vampire.

Trinity was once a fragile girl. Being taken by a powerful vampire prince changed her, Discovering him in the arms of another  woman changed destiny. Alone, she’s earned fast how to be tough, how to survive, and how to protect the people of her city from the evil that lurks in the dark. She was managing just fine, until Basil walked back into her life.

Basil Hawthorn has been the reigning prince of vampires since banishing his father to the Realm of Dark Mystics decades earlier, When a perfect dream makes him realize Trinity is at risk, he decides the only way to save her is to push her away. Doing so is not easy. Trinity is the only woman he has ever loved, ever will long and he can’t seem to let her go.

When rumors arise of a place to raise the king ad blot out the sun, both Trinity and Basil know they must do everything to stop it. Even if it means working together. Despite the betrayal and the threat, they find themselves drawn to each other. Love has no boundaries, especially in the face of danger. But will they be able to stop the ritual before it's too late?

Or will the darkness capture them both.

Trinity stood in the shadows and watched as a group of humans exited a local hangout called Buckeye’s Bar. It was a known pick-off for her kind. Most of the humans that came and went from the bar tended to leave through the back entrance which led to the alley. Then bam! You were vamp food.

People were so stupid. Why did they think they had their faculties in order when they plied themselves with alcohol? The brain was sluggish after several drinks and thus impaired their thought process.

So of course, stupid and drunk, they stumbled through the alley thinking themselves impervious to harm.

When would they learn?

Considering the past few weeks, it seemed as though the vampires were out in full force. Okay, so people didn’t want to believe there could actually be such a thing as a blood sucking half dead creature taking up residence in their city. But come on, one look in the newspapers and you had to at least be worried about all the dead bodies being found lately.

Still, people never believed it could happen to them. Until they end up dead.

She watched a group of young girls—and if they were of legal age, she would eat her shoes—stumble from the bar. They separated and two went off towards the street while the last wandered drunkenly down the dark alley.

Oh yeah, like this was going to end well.

“Five, four, three, two, one. Bam!” She shot her hand out just as a vampire jumped from out of the shadows and right beside the stupid young girl. Shaking her head, Trinity moved towards the screaming girl. Idiot.

“I don’t think you want to be doing that.”

The tall, gangly, greasy haired vampire jerked and spun around to face Trinity. His teeth were primed for the kill, his yellow eyes glaring at Trinity as if she were his next meal. The poor girl in his arms was wailing something awful.

Now you regret going through the dark alley.

Trinity lifted a brow, cocked her body to one side and rested her hand on her hip. “Jesus, could you have said anything more lame?

Let the girl go and no one has to get hurt.” Okay, so that wasn’t completely the truth. He would be more than hurt when this was over.

He would be dust.

“How ‘bout I keep her and you wait against the wall until I’m done?” He jerked the girl towards him, yanking her head back to expose her neck. He was just about to bite down when Trinity placed a hand on his shoulder. He looked up and his face froze.

“How ‘bout I don’t.” Trinity bared her fanged teeth to show him she was not going to back off. “Beat it kid.” She clamped her hand on the vampire's shoulder, her nails digging into his flesh as she jerked her head at the girl. As she’d suspected, the guy was a wimp.

He released the girl who immediately ran off screaming.

“Now, you wanna take off, or am I going to have to mess up that pretty face of yours?” she asked sarcastically as she glared down at him.

“You couldn’t handle me, bitch.” He slapped her hand free, then curling his fingers in a fist, threw a punch at her face.

She was ready and ducked out of the way. Slicing her hand up, she chopped him in the neck, sending him crumbling on the ground. “You don’t want to mess with me, jerk,” she advised as she planted a booted foot on his jugular. The razor blades she had attached to the toe drew a small amount of dull gray, deoxygenated blood as she pressed it just below his chin
.
“Go ahead and dust him, he’s useless.”

Trinity glared over her shoulder at the man she had once been destined for and felt her heart ache. She couldn’t stop herself from admiring the beauty of the man before her. His long dark hair floated in the light breeze sweeping away from a face sculpted of fine bone and delicate skin. He looked so dark and dangerous in that long, black leather coat he always wore. One look into his translucent blue eyes turned her heart to mush.

Then she reminded herself how much she detested him.

To show she wasn’t a push over, Trinity pressed her foot harder, the razor blades cutting into the vampire’s neck. His arms flailed out, trying to yank her foot away from his neck. His legs kicked wildly, but Trinity had a good ten pounds on the scrawny vamp. Tilting her toe downward, she sliced deep into his neck, finally cutting his head off.

In a whoosh he disintegrated into a pile of dust, his last breaths used to scream his way to death.

She took a deep breath, shook the remnants of a useless life from her boot then turned. “Basil.”

“Trinity.” They stalked each other like the predators they were, neither taking their eyes off the other.

Her breath always caught in her throat when she looked into those icy blue eyes of his. Unlike the rest of her race that had yellow eyes,he had the color of his heritage. He was royal. “So are you, but you already know that.” She circled him, her eyes never leaving his. She knew how quick he could be, and she was prepared. “Was he one of yours?”

“Would I have cared if you dusted him if he was one of mine?” His hand slid to his pocket and he pulled the pack of cigarettes from his pocket. “How have you been?”

She rolled her shoulders, the itch still irritating her. “Better now that I left you.” And wasn’t it odd how acrid a lie could taste?

“I noticed you’ve had your belongings gathered from our home.”

“Your home,” she corrected, keeping her distance from him. She knew perfectly well being close to him would have dire repercussions.

“Have you settled into your apartment, then?”

He was being so nice, so civil. She didn’t like it. “Why are you here,
Basil?”

“I might ask the same of you, Trinity.” He lit the cigarette smoothly and the flame showed a devastatingly handsome face, with curves and lines and strength.

“I’m protecting the humans,” she remarked with an edge in her voice. “Always the warrior, my fiery princess.” He smiled sweetly as he drew long and hard on his cigarette, then smartly blew a ring of circles in the air. All without taking his eyes from hers.

“Don’t call me that.” She hated when he called her that. Okay, once upon a time hearing him call her that made her hot, but that was then.

“It’s what you are and always will be to me.”

Every year at Christmas I make a favorite for my kids and families. If I don’t, I get plenty of complaints and sad faces. This is a recipe I found in an old cook book, and I decided one year to give it a try. It was as if I had made heaven in a bar. Everyone loved them. LOL
Now, this doesn’t have to be a holiday treat. You can make it any time of the year.
What recipe am I talking about? Its Eatmore Bars. If you have peanut allergies than this isn’t a recipe you’ll want to try.

What you will need is:

2cups brown sugar
2cups corn syrup
3table spoons of cocoa
2cups chocolate chips
4cups chopped peanuts.
Mix the first four ingredients together in a pot and heat until boiling. Remove from heat and add in chocolate chips. Once melted, add the nuts.  Press into a large cookie sheet. Let cool before cutting.
There you go. It’s a simple recipe. I hope you enjoy them.

They sound yummy Shiela and since they have peanut butter in them, they're nutritious, right?

Do you have a question for Shiela? If so, leave a comment.

Thank you stopping by.