Meet guest Ed Williams. Ed works professionally in the Human Resources management field. His life took a decided turn in 1995 when he brought a home computer and began writing down wild old stories about his upbringing in Juliette, Georgia. He had so much fun putting these stories to paper that he worked at them for almost a year before tiring of the effort. These stories, through an unusual series of events, were published in 1998 in hardback under the title, Sex, Dead Dogs, and Me: The Juliette Journals.


After a year, Ed's original publisher from Texas was so deluged with orders that he decided to quit printing the book and returned its rights back to Ed. In December of 2002, Southern Charm Press out of Atlanta purchased the rights, and published it under the title, Sex, Dead Dogs, and Me: The Paperback! Ed's second book was released in 2003, it was titled Rough As A Cob: More of The Juliette Journals. It was published by River City Publishing in both hardback and paperback formats. In 2007, one of Ed's stories, Sally the Screamer, was included in Jefferson Press' Southern humor anthology, Southern Fried Farce. And scheduled for release in November of 2009 is Ed's first novel, a wild Southern boy Christmas story entitled ChristmaSin'.


Ed has twice appeared on the Georgia Public Radio program, Cover to Cover, he has written a syndicated weekly newspaper column called Free Wheelin', and has won four prestigious online reader's poll awards for his books. His MySpace page garnered over 24,000 readers and 170,000 plus profile hits during its one year run. He has spoken to groups all over the southeast, and has been compared to some of Georgia's most noted humorists.


Ed and his family currently reside in Macon, Georgia. 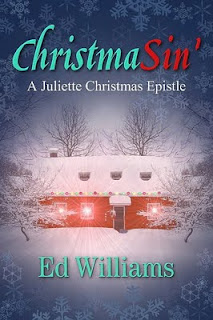 Tired of sugar plums and sit-com Christmases? Ready for something real, wild, and kickin'? Try reading ChristmaSin', a deeply Southern Christmas Epistle that'll have you wishing Christmas really was every day!

Christmas isn't just about sugar plum fairies and reindeer dancing across the sky. It can also be about red clay chunk wars, cock fighting, dead people who may really not be, and more! Get set for a wild, wild Christmas ride when you read ChristmaSin', Southern Outlaw Author Ed Williams' take on what a true Christmas in a small, rural Southern town is really all about! Learn about Christmas miracles happening in the most unlikely of settings, the early '70s in tiny Juliette, Georgia. It's a novel that could be true, in some places actually is, and one that will both warm the heart and tickle the funny bone!

For me, today is gonna be busy. I’ve gotta make a quick run over to Jenny’s this afternoon in order for us to exchange gifts, and then I’ve gotta get back here in time for dinner. On Christmas Eve we usually eat right at six pm, and then we have this little family-type traditional thing that we do. We all go into our living room right after dinner, fire up the fireplace, and then sip on coffee or eggnog together. That’s pretty nice, ain’t it?


There’s also the slight chance that if we beg, plead, or just plain get on Mama’s nerves enough that she might let us open one Christmas gift. Underline the word “might.” We’ll be really lucky if that happens, though, because Ed Jr. and my mom believe in opening gifts on Christmas morning only. Mama says we do that to be sure we celebrate Jesus’ birthday when we’re supposed to. Ed Jr. says that we open them then so that he doesn’t have to listen to any pissing and moaning about us not having any gifts left to open. He adds that if anyone has a right to a peaceful Christmas, it’s him, as he has to cut down and put up the tree, deal with Mama’s relatives, and pay the tab for our entire Christmas. Not to mention the fact that he’s a Korean veteran. You’ve got to admit his logic is not bad, and at least it’s pretty original.

Thank you for sharing with us today, Ed. Readers, leave Ed a comment or ask him a question and you'll be entered in my monthly ebook drawing. To contact Ed, use these links. http://www.ed-williams.com/%20www.twitter.com/ELW3 or  http://elwiii.gather.com/

Linda
http://www.lindalaroque.com/
Posted by Linda LaRoque at 11:11 AM