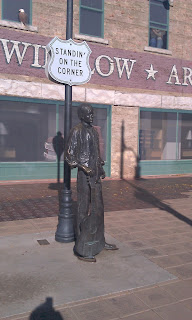 In November of 2007 our tour of Route 66 began. We drove to Amarillo, TX and made it all the way to Winslow, AZ. Smoke from grass fires filled the air and we decided to head home. Then in June 2010 we drove from the outskirts of Chicago to Oklahoma City. The kennel called and said our little dog Molly had had a seizure so we decided to head for home. One day we'll have to drive the short stip from Oklahoma City to Amarillo. On this trip, we started in Winslow, AZ, but let me back up a little.


I'm in the process of writing a romantic suspense set in New Mexico along the old road. A ghost is involved in the story as are some antique directional Zuni fetishes. If you're not familiar with Zuni fetishes, they are beautiful pieces of art. Google them and read up. I have four fetishes, three I purchased while in New Mexico on trip one, one I purchased in South Dakota, and I added two more to my collection on this trip--a raven and a porcupine. Both are significant to my story as is the white bear I bought in South Dakota. 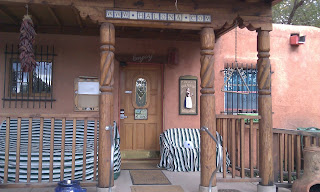 So, we made a detour on our way to Winslow and spent the night in Zuni at the Inn of Halona. It's a lovely B&B right in the heart of Zuni land. Part of the structure has been there since the eighteen hundreds. Their breakfast is one of the best I've seen at an inn and the servings are generous. Try the blue cornmeal pancakes.
While in Winslow, we stayed at the historic La Posada Hotel, once a Harvey House. It is a beautiful place, filled with exhibits of days gone by. Amtrack still drops lodgers there and the dining room is well-know for its delicious cuisine. 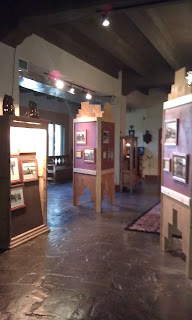 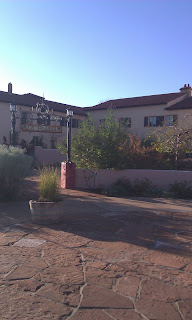 The picture to the left depicts the entrace to the courtyard at La Posada. It has several gardens and iron artwork.

To the right is a few exhibits depicting the hotel in its early history. If you're interested, click on this link and read up about it's early construction, the Harvey girls, and its restoration.

The neat things and places we saw are too many to list, though I'll soon blog about Oatman, Clark Gable, and Carole Lombard as well as the small mining town of Calico, California. 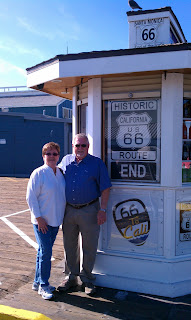 I'd love to say we drove Route 66 all the way through LA, but we didn't have the time. Our resource said it would take all day, so we took the shortest route we could to the Santa Monica Pier. We were excited to reach the end of our journey and spent some time on the pier gazing out at the ocean and breathing in the salt air. We did learn that the actual route didn't end at the pier but somewhere downtown. In the 1950s, when the movies The Story of Will Rogers and The Grapes of Wrath came out and imortalized the road, the end was moved to the pier.

Back in the car, we drove up Highway 101, connected with scenic Highway 1 to San Simeon. I'll blog about the sights there on another day.

Thank you for stopping by and driving the old mother road with me. Happy Reading and Writing!