A Blurb of A Marshal of Her Own - Please Vote

Just one more week to vote for Book Of the Year at Long and Short Reviews, and I'm in second place. So, if you haven't voted please, please vote for A Marshal of Her Own. Click on the picture below to go to the voting page. 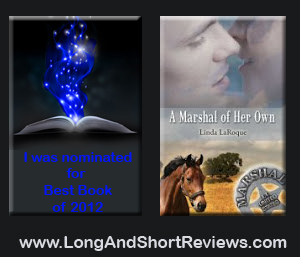 Here is the blurb:


Your vote is greatly appreciated!

Email ThisBlogThis!Share to TwitterShare to FacebookShare to Pinterest
Labels: A Marshal of Her Own, Book of the year., Linda LaRoque, Long and Short Reviews, time travel romance