Welcome, Mary. I love Native American Historical Romances and yours both sound intriguing. Thank you for being here today.

Thanks to Linda LaRoque for having me as her guest. And to thank you readers for reading my post, I’ll give away an e-book of PASSION’S VISION to one person who leaves a comment.

When I decided to try my hand at writing, I did what many other aspiring authors do…I looked back at my family history for a story. To my disappointment, there was nothing very exciting in my family line.  I haven’t given up on my family. I’m sure there is a story there somewhere. But…when I turned my attention to my husband’s family…WOW…I found a character on whom I just could not turn my back. This man inspired the Passion Series.

Again, like many other aspiring authors, I read everything I could find on this ancestor of my husband’s.  I read, took notes on the palm of my hand, the back of my hand, on my wrist, grocery store tabloids, gum wrappers, tiny notepads, anything I could get my hands on. I even carried a tiny recorder.  I just had to do this because there is no timetable or appropriate location for inspiration. It just happens.  During my more organized moments, I created a file to keep track of any historical events pertinent to my story. I created a basic outline containing interesting, exciting, death-defying and romantic escapades of my hero that I was sure would thrill my readers.

This ancestor is James Adair who wrote, as I understand it, the first book outlining the lives of several Native American tribes. At the time I was researching this book, Adair's HISTORY OF THE AMERICAN INDIANS, was difficult to find but I located an old copy. I used his book as one of my sources for research on the time as well as research on the man himself. 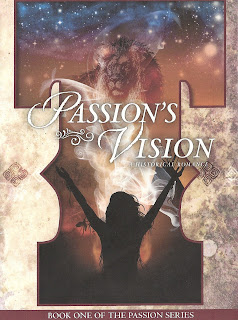 I must admit, much of my own romantic imagination went into creating James Fitz-Gerald. PASSION'S VISION is a fictional story about the love that grew between an agent of King George II and a Cherokee woman warrior. Thanks to Adair's book, I feel I was able to bring to life a time in history that was filled with adversity, pain, and adventure as well as pride, justice and a love for community and nature that sometimes feels lost in the world today.

Dawn is the daughter of James Fitz-Gerald and New Moon.  Her hair is fair and her eyes blue, but any resemblance to her European ancestry stops there. She grows up to be a warrior with the skill and determination of her mother. She also has her mother’s gift of vision.  I love stories of strong women. To me a woman can be strong in so many ways. The female heart is as fierce, determined and strong as any man’s, but it also holds a tenderness all its own.  New Moon and Golden Dawn are such women. 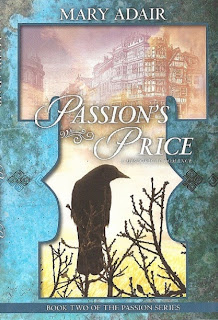 In book three, PASSION'S PROMISE, the story continues with Johnny Cloud. John is the son of Raven Cloud and Golden Dawn. Like his grandfather, James-Fitzgerald and his mother, Golden Dawn, Johnny possesses the warrior’s heart. He made a promise and he will fulfill it, not because it was a promise, but because he will not die before all he holds dear is safe.

Here’s the blurb for PASSION’S VISION:

Passion's Vision takes place in the mid 1700's in the Carolina Cherokee villages. James Fitz-Gerald is an agent for the Court of King George II. James is on an undercover mission from the King when he arrives in the Cherokee village, Chota Town. He knows this mission will be his most difficult with the lives of both white families and Native Americans in the balance. With this responsibility weighing heavily on him, the furthest thought from his mind is a romantic entanglement. That is, until his life is saved by a proud and beautiful Cherokee woman.

New Moon, sister to Chief Dancing Cloud, is a warrior in her own right. She hardly notices the white man whose life she saves in battle. But when James arrives in her village, she is reminded of the troubling visions sent to her by the Great Spirit. She determines within her heart, even after a vision from the Great Spirit telling her otherwise, she will never belong to a white man, and most assuredly not to this one her villagers call Red Panther.

PASSION’S VISION is the story of the love and respect that grows between an agent for the Court of King George II and a Cherokee Princess. Their lives are destined to be filled with adventure and triumph, sometimes with loss and pain, but always with passion.

Here’s an excerpt from PASSION’S VISION:

New Moon stood before the open doorway of her summer lodge and peered into the dark interior. Behind her she could hear the excitement of the village; it crawled over her skin like a thousand ants. She breathed deeply of the scent of wood smoke and roasting meat, but not even the comforting aromas that spoke of the safety of her home could quiet the uneasiness of her spirit.

His hair was the deep rich color of the great river’s clay. Every nerve, every sense, told her he was the one. She could feel him now, drawing closer.

As if in response to her thoughts, the village quieted. Even the dogs that had moments before been yelping suddenly stilled. She did not have to turn around to know they were watching him. He would at this moment be coming through the gate of the tall wooden wall surrounding their community.
***
James studied the tall timber walls on either side of them as they moved slowly through the narrow gateway. He had heard that the forts of the frontier were patterned after the design of the Cherokee’s walled villages. Above, standing guard along the tall wall, were warriors whose job it was to watch over the coming and going of the villagers and visitors.

Once all were through the gate, he pulled back lightly on the reins and his large stallion halted. From his vantage spot he had a clear view of the village. Unlike the plains Indian who lived in tents, these people lived in wooden lodges. Each wooden or summer lodge had a smaller domed structure beside it used for sleeping in the winter.

He saw the Peace Chief exit his lodge. Their eyes met briefly and James grinned as he looked away. His friend Dancing Cloud would not have shown surprise if he’d shown up in his village with a traveling circus, complete with clowns and dancing bears. Why would his expression be any different at seeing him dressed as a trader and riding double with Thomas?

As Dancing Cloud made his way in their direction, James let his gaze move from one detail of the village to another until his eyes focused on the straight, stiff back of a woman.

Something about her stance piqued his interest. Not one other person in the village stood with his back turned toward the new arrivals. In fact, the entire citizenship moved in their direction. Everyone…except her.

He tilted his head to one side and contemplated her behavior. She was doing nothing he could discern. Just standing there, waiting. For him? His skin tingled.

The buy links for PASSION’S VISION are 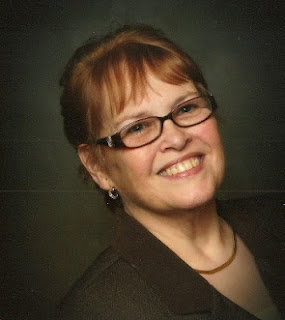 Mary A. Adair is an Amazon bestselling author of Native American romance, including the poignant PASSION’S VISION, recipient of the Betty Hendricks Award. Mary did extensive research on several Native American tribes for the 18th century setting of her books. One of her many sources for learning about the rich Cherokee culture of that period was a book written in the mid 1700s by James Adair, an ancestor of her husband.

Mary is also the author of CAPTIVE SPIRITS, a young adult fantasy. Her day job life has been as a registered laboratory technician in radiology and phlebotomy. After spending most of her life as a Texan, she now lives in Eastern Oklahoma with her husband and their menagerie of animals.

Thank you, Mary for being with us today. I can't wait to read your books. I have a Cherokee ancestor and have been to Tennessee trying to find information.


Readers, leave Mary a comment to be entered into a drawing for an e-copy of PASSION'S VISION.Thank you for Reading and Writing!

Posted by Linda LaRoque at 4:00 AM