Welcome, Amy! It's great to have you here and I look forward to hearing about your new release, Hidden. The name evokes mystery and perhaps a touch of the unknown. Amy McKinley is a freelance writer and author. She lives in Illinois with her husband, their four talented teenagers, and three mischievous cats. Hidden is her first novel in the Five Fates Series with Taken, the second, due to release in the spring of 2016. She is excited to finish the series and begin the next that’s already demanding attention.

Thank you Linda LaRoque for having me here today. I’m excited to share a peek into a few of my family’s favorite holidays and traditions with her readers and friends.

Out of the many holidays throughout the year, Halloween, Thanksgiving, and Christmas are the biggest for my family. Among the three, each of us has a favorite. With a house full of four growing teens, times are changing. Not quite empty nesters yet, we do see less chaotic times looming ahead with one already in college. This years Halloween was different than past ones.

My oldest teen loves Halloween with all the spooky decorations and costumes. She turns the holiday into a month of festivity. She rallies her siblings and Dad into decorating the house with the scariest design possible, which always includes, shudder, spiders. (She is my go to girl when there is a spider in the house and is on the “no kill” capture and release team. Our house is evenly split down the middle where spiders are concerned.)

Not only do they decorate outside, but inside as well. Cupcakes were made with her youngest sister—our resident baker—truly evil creations, as they were chocolate with buttercream frosting. Seriously, why!

Thanksgiving centers around family, giving thanks, and…yep, food. Now, who doesn’t love a holiday like that? I do, I do! But, I have a slight problem.

I HAVE A PARTICULAR SET OF SKILLS
AND IT'S NOT COOKING!

Fortunately, my husband cooks a fabulous turkey. My job: mashed potatoes. I even get help with peeling the potatoes since my skills do not measure up to the superior ones of the teens in my family. I welcome their aid as the job is done in record time.

We always have turkey, salmon, and mashed potatoes. There are several other staples that are at the table, but those are the main ones. And for desert: French Silk Pie. It’s expertly made by teen three, our resident baker. It is the most incredible pie ever eaten. What’s at your table?

My absolutely favorite holiday of the three is Christmas. Let the shopping begin! Which is so funny because I’m not a shopper. I leave that to teen two and three. They can shop. Teen three really should be the star in the movie Shopaholic; I see the resemblance quite clearly. 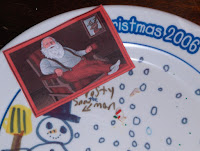 Family traditions are wonderful, something that form special memories for everyone. We have a few around Christmas that we do every year that begin with a plate kit on Christmas Eve. Once the kids draw their design for the New Year, complete with their names and the year, they are sent out and used as the weekend waffle or pancake plates. When they are all grown it’ll be fun to see what they chose to draw each year and how their artistry progressed.

Our pets are also included in Christmas and they are always very excited. They know they have presents coming and have been searching and actively participating in wrapping. Their main goals are to become the wrapped gift by lying on the paper, run off with the string, and locate their gifts by riffling through the bags. So they know which gifts are theirs on Christmas morning (we don’t put theirs out until that morning) we put a little bit of catnip in the wrapped present so they can find them. It’s super cute.

On Christmas morning we wake to a proof of reindeer visitation. Hoof marks litter the deck, lured by the reindeer food the kids scattered the night before. Several bells (four to be exact) are miraculously left behind from the sleigh. Inside, Santa enjoyed the cookies and milk left out and has left presents, which are opened, along with stockings before breakfast. After breakfast, the rest of the presents are opened and family and friends arrive for more of the same.

I polled my family and asked them what their favorite holiday was of the three and this was the result:

Jade froze, her paintbrush hanging mid-air above her palette. The light streaming in diagonally through the bay window cast an eerie, surreal frame over the room.

She scanned the painting. Buildings cast long, ominous shadows, stalking the pedestrians as they made their way to and fro, huddled against the misery of the evening. A man lay sprawled, his lifeblood staining the sidewalk crimson. Half in a deserted alley, he was yet to be discovered. This was the detail Jade concentrated on. She blended a burnt red and used careful brush strokes to complete the scene as the portrait fell prey to the darkness that burned inside her.

Without meaning to, her gaze was once again drawn to the slain man. She reached up and touched the blood seeping from his body, her fingers coming away wet. Bringing her hand to her nose she closed her eyes and inhaled.

Instead of the cloying scent of her oils, she inhaled the coppery twang of blood.

Stunned, her mouth parted on a silent scream. No! Darkness bubbled to the surface, invading her senses with a roar. Unable to fight the invasion, her heart beat an increasing crescendo. Part of her didn’t want to struggle, not with the temptation of death on her hand.

Deep inside, a macabre shadow stretched. Hungry for more, its long arms clawed for purchase with each breath. Changing her, as part of her argued for the better. The other part—the one that gloried in her fire-kissed hair and shimmering eyes—cried against this crime and screamed for redemption.

She crouched to welcome the demonic strength as the parasitic monster grew inside her. Evolving into a fierce predator, she was able to taste, weigh, and measure the souls who sifted through her fingers.

Still, she fought for space in her own body. For control.

But with the scent of blood, of death, of prey teasing the monster—she was losing fast. It’s happening. Unshed tears burned her eyes. Finally. The curse of the three Fates had begun. With her.

Slowly Jade stood, bit down on her lip and welcomed the pain. The distraction would help fight the transformation. Dipping the brush into the Caribbean blue, she swirled then began to paint a shimmering cove. The vision soothed the beast that lurked just beneath, but it was temporary, and Jade knew its evil would soon mutiny. The Fates’ curse would change her over time, unleashing an unstoppable power within her to annihilate the gods who created her and anyone who got in her path.

Succumbing to a surge of menace, Jade dropped the blue-tipped brush as her back snapped straight and her mouth opened on a silent scream as she lost control. Every cell stretched to accommodate the new presence. Shivering from the effects of her altered state, she briefly shut her eyes, adjusting. When she opened them, her painting was before her, and she viewed the scene anew. Cocking her head, she closely observed a woman who tightly clutched her rain slicker about her body.

This one will not make it home tonight.

Whew! I'm worn out, but feel the urge to run. This sounds like a gripping tale—just right for you paranormal/fantasy folks. Hidden is available TODAY. Copies are available at the following:

To connect with Amy, you can visit these sites.

Posted by Linda LaRoque at 7:50 PM