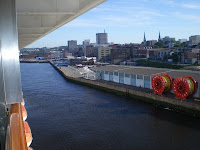 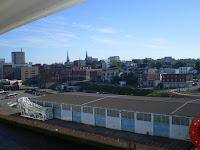 At 8:00 AM we sailed into the dock at Saint John. Since our city bus tour wasn't until 11:30, we had time to eat a leisurely breakfast and shop at the market on the dock before boarding our bus. Our tour guide dressed in eighteenth-century clothing entertained us with stories of the towns history.

Our first stop was the City Market which opened in 1876. It's the oldest city market operating out of the same building in North America. The architecture is unique in that the roof resembles an inverted keel. The market sells fresh produce, meat, and has a variety of gift items as well as eating places.

Pictures below are two views of the City Market. It is located on the block across from King's Square and Bannerman Park. 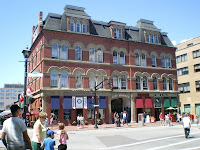 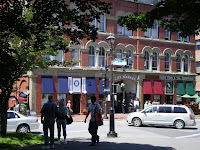 In 1877, part of Saint John was destoryed by fire. The park became a tent city for those who'd lost their homes. While we waited for our bus to return, we rested on a park bench. 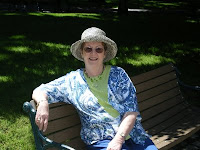 We drove by the Carleton Martello Tower National Historic Site (see picture below). Construction began in 1814 but wasn't finished until after the war of 1812. Our next stop was at the reversing falls. When on a time schedule, it's hard to be there when the reverse takes place, but as we were driving away and across a bridge, we could see the whirling of the water causing rapids begin. 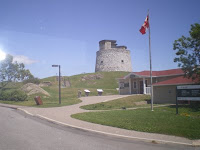 And last for tonight, here is our ship from a bridge as we return to the dock. There is much to see in Saint John. I'd like to have been able to stay several days. 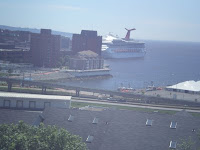 I hope you've enjoyed our trip to Saint John and will join me tomorrow night for Hallifax.
Thanks for stopping by and Happy Reading and Writing!
Linda
http://www.lindalaroque.com/
Posted by Linda LaRoque at 8:42 PM