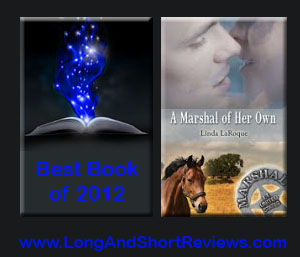 Thank you all for voting for my story. I'm thrilled to add this honor to my accomplishments and
couldn't have done without everyone's help.

In case you haven't read it, here is a blurb and excerpt.

Blurb:
Despite rumors of “strange doings” at a cabin in Fredericksburg, investigative reporter Dessa Wade books the cottage from which lawyer, Charity Dawson, disappeared in 2008. Dessa is intent on solving the mystery. Instead, she is caught in the mystery that surrounds the cabin and finds herself in 1890 in a shootout between the Faraday Gang and a US Marshal.

Dessa stood still and watched as they conversed. Something stank to high heaven about this entire situation. Why were the cops chasing robbers on horseback? It’s not like Fredericksburg was that isolated. She glanced at the captured men. The boy moaned, and she made a step to go over and help him. The Marshal spun, and the expression in his eye froze her in place.

Again, thank you for your help!

Email ThisBlogThis!Share to TwitterShare to FacebookShare to Pinterest
Labels: A Law of Her Own, A Love of His Own, A Marshal of Her Own, Linda LaRoque. Long and Short Reviews book of 2012, Prairie, series, Texas, western time travel