Stagecoach Travel—Research for my current WIP 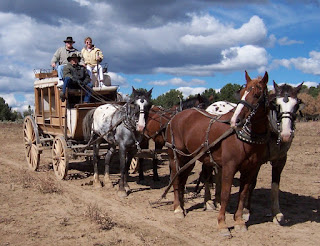 It's exciting to learn something new. In the last couple of weeks, I've spent a lot of time researching details on train and stagecoach travel in the 1890s. And about Pecos County in west Texas. Part of my story is set in Fort Stockton, and though I lived there for four years, I know very little about it's early history. Our public library has a set of the Pecos County History books so I spent a good deal of time reading through the first volume.

Here I am riding shotgun. (Picture at the top left)

Since my hero and heroine are traveling via stagecoach from Monahans to Fort Stockton, I'd like to share what their mode of transportation looked like inside. I had to search a long time to find a photo of the center seat. (See below) Imagine sitting there for 8-12 hours while traveling over rough terrain.

Prior to the teacup shaped Concord, coaches were boxy and had no leather braces. A long ride in one would be grueling, but I guess folks were tougher in those days. When vacationing in Colorado, my husband and I rode in a stagecoach for several miles. At first I sat inside the coach, but later joined the men on the top, the most comfortable seats on the coach, and it was nice. I could have traveled a long way from that seat.

The Concord coach, developed in 1827 by J. Stephen Abbot, had leather straps called thorough braces, which served as shock absorbers and allowed for a smoother ride. They were designed to hold, six, nine, or twelve passengers. Up to six people, including the driver, could sit on the top, if luggage didn't require all the space. Often mail was stored under passenger's feet if room elsewhere wasn't available.

Many, but not all coaches had the extra seat for two behind the driver, often used for guards, especially if they carried gold or mail. Some models had one at the back also. Coaches were 8 1/2 feet tall and weighed 1 1/4 tons. Imagine how heavy it would be loaded with passengers, luggage, and mail. 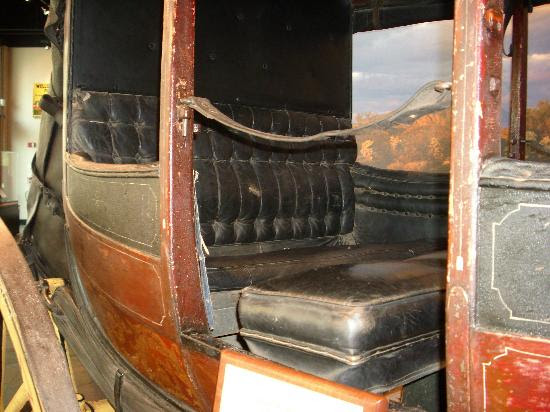 Passengers sitting on the center seat faced the front of the coach so six passengers were sharing leg room and their knees often overlapped. The only thing they had to help them stay balanced was a wide piece of leather stretched from one side one side of the coach to the other. Though the passengers which faced the rear of the coach received less dirt from the windows, the forward facing seat had more leg room and offered a better view.
This photo of Wells Fargo History Museum is
courtesy of TripAdvisor 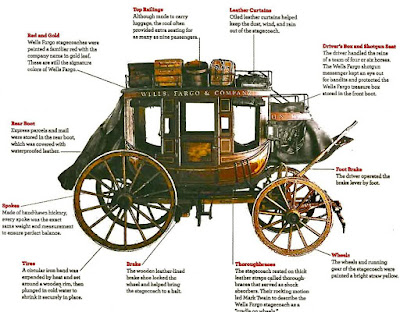 The number of miles a stage could travel in one day varied and was determined by terrain, availability of water, conditions of the road, and weather. If the coach became bogged down in mud, passengers unloaded to help push. Stops were between 15 to 30 miles apart, depending on the terrain and availability of water.

'"From Austin to the Alamo City, one old-timer later recalled, 'the trip was made in 18 hours with breakfast at the Blanco Creek, supper in New Braunfels and arrival at San Antonio sometime during the night, weather and floods permitting.' In wet weather, the 75-mile trip took the worst part of a week."

Sources for this post came from Texas Almanac -The Source For All Things Texan Since 1887: Stagecoaching in Texas.

My next post will be on stagecoach stands. Stands in a term I not heard used before so was excited to learn all about them. Hope to see you then!

Posted by Linda LaRoque at 2:15 PM