Welcome Graeme! Thank you stopping by to share with us how your novel The Pact was born. From your explanation below, it sounds like you're one of those people who like to start your story with your characters. I'm that way too.

Readers, Graeme is giving away an ecopy of The Pact. Directions on how to win are at the bottom of his post.

How I Came up with The Pact

The Pact was conceived dark and early one morning while I was walking to my opening shift at Starbucks. Just like that I met Will Lesterall and his brother, and realized they were both going to lose everything dear to them. I knew it would be a short story and would not have a traditional ending, but, given the number of stories that end as expected I thought it would be worth writing, and since many epic fantasy stories begin long, I thought having a story that could be read in one or two sittings was a good introduction.

I was also in the process of looking at my writing method. With two failed manuscripts that had taken me years to write and (try to) revise, I was ready for a new approach. I had just attended a workshop by local author David Annandale (Warhammer 40,000) on writing genre fiction and the bulk of the presentation was on the plot point outline. I left there thinking about the structure of story and wondered if it was possible to build one from the bottom up, rather than starting on page one and hoping by the end everything will work out.

I decided to test this with The Pact. Within days of meeting Will, I started outlining in stages and realized this story was set in my fantasy universe. “Their home” soon became Fort Lesterall and Will had a father, a sister, and a household servant who was far more than she seemed. I wove intrigues in and out as I expanded my outline plans and profiles, and realized this would be a prequel in a larger arc of stories. A world I had spent nearly 20 years developing suddenly came to life and, even though the concept for The Pact was quite dark, as I started writing it Will turned out to be a relatable, likeable character who I felt readers would enjoy.

I finished writing it, then submitted to Champagne Books. I wasn’t sure if it would be publishable because it ended up being too long to be a short story, so I expected a rejection letter and the possibility that, while this story was quite good, it wasn’t compatible with the market. (I also, quite obviously, knew nothing about the ebook market at the time!) So, when I stared at the email offering me a contract for this story, I was shocked.

It was also my last shift at Starbucks, so I thought the timing was perfect.

Graeme Brown is has been enchanted by the epic fantasy genre since he was a child, and consequently he started creating his own world with its stories at the age of thirteen. Influenced by writers like J.R.R. Tolkien, Robert Jordan, and George R. R. Martin, he has finally brought the first of those stories to life with his debut title, a short story called The Pact—48 pages that will whisk you away to a dark, medieval fantasy world with gritty realism. When he’s not writing, he can be found exploring number theory problems or writing computer programs, training for a marathon, or unwinding in a yoga hot room. He has also explored other facets of art, both as a hobby and a profession, including vector graphics, pen and ink, classical piano, and web design. Despite being a full time student and a junior editor for Champagne Books, he makes sure to do a little writing every day. 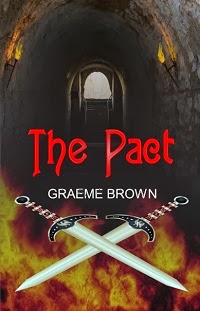 Enter the world of Will Lesterall, a boy who’s grown up in the safety of his father’s castle.

Tales of the outside world ruled by warring kings and creatures of nightmare have never seemed a threat, yet on the night celebrating the two hundredth year of the sacred Pact that has kept Fort Lesterall safe, a secret intrigue ripens, and in the course of a few hours Will is confronted with a choice greater than he can comprehend.

Join an unlikely hero as destiny pulls him into the middle of an ancient conflict between fallen gods and ambitious women, one that demands blood, both holy and wicked, and the power of an ancient fire bound in steel. As swords clash below a watching wood, hope and betrayal war as fiercely as fear and valor.

Whether he lives or dies, Will Lesterall will never be the same.

Will hurried across the dark stones. The soft tap of his shoes against the cobbles echoed in the empty Square. In the middle, where the ground sloped down toward the sewer drains, the statue of Amarr the Barbarian cast a long shadow. Will passed into it and stopped. He heard voices.
Two men spoke in hushed tones, but their words carried when the wind wasn’t gusting.
“It’s that hag, I tell ya,” came one voice. “She’s roundin’ them up, preparing one of her big spells, she is. I heards there’s a sacrifice comin’, and she means to raise the dead.”
“Don’t be stupid, Roth.” Will recognized the raspy tone at once. It belonged to Mern, the whitesmith, whose half-slashed throat had never fully healed. Will squinted, but couldn’t see where the voices came from, other than realizing they drifted over from the dark, walled yard outside Hellistead’s Tavern.
“I’ll not have ya callin’ me stupid. Oh no. I know what this is about an’hoo. You’re just afraids, justs protectin’ yurself. Ya know whatcha got in it, ands I don’t blame you for bitin’ your tongue.”
“Quiet, you hay-brained crofter,” Mern spat. “Tonight’s not a night to whisper about such treacheries. The Lord Ham will cut your tongue out, and the world’ll be a better place for it if he does.”
“Old Cren will put it back, if he do, but I says he’d best act quick, or he’ll be lacking for the parts as fits him proper. The night’s black, Mern, and it’s gettin’ blacker yet.”
There was a hollow clatter, then sharp hisses. The man who spoke improperly cursed in words that would have made Grandma Mae gasp then Will heard quick footsteps and a series of clunks. He looked back to the castle, to where father gathered his fighters, then the other way, to the Stablehouse. If father’s in trouble, I have to warn him. Will knew his words wouldn’t be taken seriously, though.
He began to run across the stone expanse. Fort Lesterall won’t fall. Mern’s a wicked man, and whoever that other one is, he’s got no wits. Cren’s just an old woman who lives in the woods. She probably doesn’t even exist.
The side door to the Stablehouse opened as Will arrived, revealing a long labyrinth of stalls lit by rows of hanging lanterns. Jak peeked from behind the door, and Will slipped inside. When the older boy closed it, the dangerous night seemed far away. They were alone, Jak peering at Will, a curry comb still clasped in his hand. He was broad-limbed and of average height, with tousled hair the color of wet earth and eyes like onyx. As usual, he smelled of straw and horse manure, but that only made him all the more inviting.
Jak grinned. “I thought you’d hurry over after the feast proper. Too many clouds tonight, though. I’m afraid we won’t be spying Hell’s Cap, but I’ve another surprise for you. Found it myself, last night.”
“We won’t be going to the groves, Jak.” Will lowered his voice. “The Unborns are going to attack. Alter Dun showed the Red Token. That means the Unborns have challenged us. The Pact is broken. Even as we speak, my father’s gathering an army.”
“Of course he is.” Will turned toward the metal spiral stair. Barrik, a wiry man with salt-and-pepper hair and a bushy moustache, bent his impressive height as he descended from the second floor serving quarters. “I’ve a hundred retainers to see to and that’s lots of horseshit, my little prince. A good thing they’ve taken to the barracks. I’m full, and there’s a thousand more coming, twenty companies marching under you uncle’s banner knight, Telliken. If we hold the night, then there will be others, and we’ll feed the Unborns hell like they haven’t seen in centuries. But if what I’ve heard’s true, then they have hell to feed us first, before we can draw breath.”
Will gaped at the Master of Stables then shook his head fiercely. “Fort Lesterall cannot fall.”
Barrik grunted, though it sounded like a laugh. He picked up a pail and carried it to a nearby stall. “I wish I believed that, lad, but this world’s not run on luck, I’m afraid. A man forges his own blade then learns to use it, or he gets cut by everyone around him. This world’s a fierce battlefield, a bitch with a thousand teeth.”
“We can fight with them,” Jak insisted. “I’ve practiced with the sword you gave me lots of times in the groves. I’m not bad.”
“You would be with armor on.” Barrik came out of the stall with a pail full of black dung. He looked at Will, at Jak, his expression grave. “No, you boys have another errand...


Note from Graeme:   I'm giving away a Free ecopy of The Pact to the first person who EMAILs me the name of Will's best friend (and protagonist of The Pact's sequel). You will find the answer by visiting my WEBSITE and MY PAGE for The Pact.) See link to website below. Email your answer to