Hi, Ron. Thank you for joining us today. First off, let me say I love your cover. Anything with red, a sword and a dragon and I'm sold! Readers, Ron will be giving away an copy of his book today so be sure and leave a comment and hopefully your name will be drawn from the hat. Now, here's a little about Ron and his writing experience. 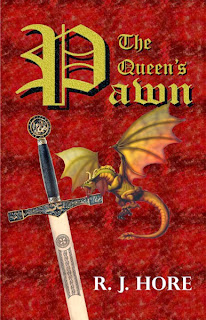 Winning first prize in a national Canadian Authors Association short story contest (a romantic ghost story) and having that published in an anthology, and a modern vampire tale published in another anthology, Evolve.

I currently review science fiction and fantasy genre novels and anthologies for an on-line magazine aimed primarily at school libraries. I have completed something over 60 reviews so far and recently co-authored a history: The Rotary Club of Winnipeg-100 Years of Service.

Through BURST Books, writing as R.J.Hore, I have a medieval fantasy novel of murder and intrigue entitled The Dark Lady that came out in February 2012 and a fantasy detective story in December 2012 called Housetrap. Housetrap was the first in a series of novellas under the The Housetrap Chronicles. Three others in the same series are: Dial M for Mudder in July 2013, House on Hollow Hill in September 2013, and Hounds of Basalt Ville in November 2013. Another medieval-style novella Knight’s Bridge arrived in March 2013, and a second full-length novel, again a medieval fantasy, The Queen’s Pawn, on April 1st 2013. These were all published first as ebooks, with both full-length novels coming out later in print.

I also have a large stack of completed manuscripts in various stages ranging from a “What If” — the North Americans discovered Europe first, set in 1215AD – to a contemporary bickering married couple swept away to an alternative universe, and a futuristic tale of a lady archeologist set in outer space. Have just completed two sequels for The Dark Lady which will be published in 2014.

Hobbies include photography, trying to keep on the good side of my wife, keeping track of my children and grandchildren, and wrestling the blasted cat off of the keyboard. In my diminishing spare time I sail on Lake Winnipeg and try not to get lost.

The Queen’s Pawn – An idea

Writer’s often get asked where their ideas come from. In my case, they can pop up from almost anywhere and demand to be set down in print. Sometimes it is a newspaper headline, sometimes an image on television, and sometimes it is simply a single scene that I imagine while day-dreaming or out for my early morning walk. In the case of The Queen’s Pawn, I pictured a young man trapped in the fall of a burning city. I’m not certain where this idea popped up from. Maybe I had just seen something about Troy on the television, or set down a book I read about the fair Helen. In any case, that is all I had in the beginning, just a scene and one character.

Starting with a panicked young man, who on the first page turned into an older student from a school for the priesthood, I sent him fleeing through the city as flames and a rampaging army crashed through the streets behind him. Still short on ideas, (I’m a pantser, not a plotter) I had him stumble upon a dying duke, and a magician, and a plot is launched. Our reluctant hero must rescue the beautiful Queen and escort her to safety. New characters suddenly just begged to be included in the tale: the queen’s spoiled daughter, the queen’s large amorous maid, and a throng of other folk clamoring to be rescued.

At this point in the story I don’t have an idea on the character’s motivation, and I’m not even certain who the villains are. I have finally figured out where we are going, which is always a good thing when you are writing a novel. What I find interesting as I stumble through an adventure such as this, is how the characters can develop, change, take on a life of their own. After a few ah hah! moments all is revealed and I can press on.

Is The Queen’s Pawn the end of the story? I must confess I have already written down a couple of sentences under the “what happens next” category…just in case.

On his way to study for the priesthood, Harow is mistaken for a bold and infamous duke. Instead of study, he finds himself thrust into action to rescue a beautiful queen and her spoiled daughter as they flee the city. Now, a rebel army is hot on their heels and Harow must keep his wits about him as he leads the small group of survivors to safety. High adventure, with a gentle touch of humor and romance.

“Did you kill him?” the low, harsh voice grated.
“Ah...no, I found him like that. I must flee, the enemy is near and...”
“Silence! Do not lie to me, boy. I saw him deliver a message to you. What was it? Tell me quickly or I will reach down your throat and pull out your feeble heart, then feed it back to you.”
Long bony fingers materialized from deep within black sleeves. One pale hand held a dagger with a thin curved blade almost the length of a man’s forearm.
“Rats stolen your voice box? No difficult problem, my young friend. I’m certain I can dig something useful out of you, given time.” He smiled, revealing yellowed, broken teeth. The words dropped to the melody of a soft purr blended with honey and seasoned with fine spices. “Come here, my friend, and tell me all you know of this affair.”
Harrow felt his mind turning to soft gruel, felt those eyes burning two holes inside his aching head. Suddenly a hot desire to babble all, like a man who has just witnessed his own death and woken to realize it was but a bad dream, or a young rooster who has just avoided his first hungry eagle, gripped him.
“He had a message for the queen. The king is dead. He wanted me to take his medallion and ring, go to the palace, and deliver a message to the queen. He made me swear to do it. I do not know him. He fell there, right in front of me and died here on the street.”
The tall wizard bent, examined the body carefully, glancing up once or twice at Harow who knew he must look like a comic statue in the lane, mouth open, eyes wide. The sounds of fighting drew nearer, raging up the street on the other side of the row of buildings.
“You must do as you were bidden.”

Thank you for sharing with us today, Ron. I'm sure readers are ready for you to get busy on those few lines you have to mold into a sequel. Reader, don't forget to leave Ron a comment and also add your email address. You may be the lucky winner of this ebook. Ron will be selecting the winner on Sunday evening.